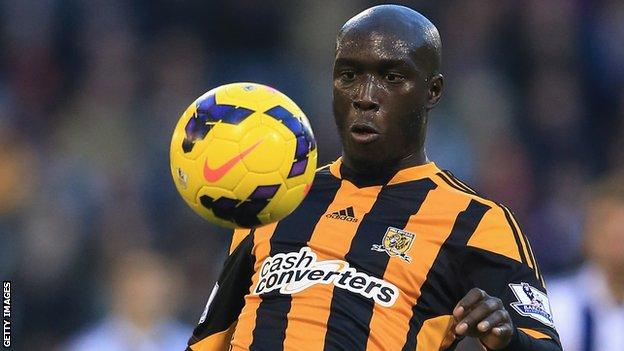 Hull City striker Yannick Sagbo has been fined £15,000 by the Football Association over a charge relating to Nicolas Anelka's 'quenelle' gesture.

Sagbo, 26, issued a message of support on social media for the Frenchman, who made the offensive gesture in December.

Anelka was banned for five games, fined £80,000 and sacked by West Brom.

Sagbo admitted the charge and has also been "warned as to his future conduct and ordered to complete a compulsory education course".

The quenelle sign is described as an inverted Nazi salute.

An FA statement read: "Mr Sagbo was charged by The FA with improper conduct concerning social media postings relating to the quenelle gesture.

"The charge was that the comment was abusive and/or indecent and/or insulting and/or improper, contrary to Rule E3(1).

"Further to that, The FA considered the comment to be an aggravated breach, as defined in FA Rule E3[2], in that it included a reference to ethnic origin and/or race and/or religion or belief.

"The Independent Regulatory Commission will provide written reasons for its decision in due course.

"Both The FA and Mr Sagbo have the right to appeal the decision."