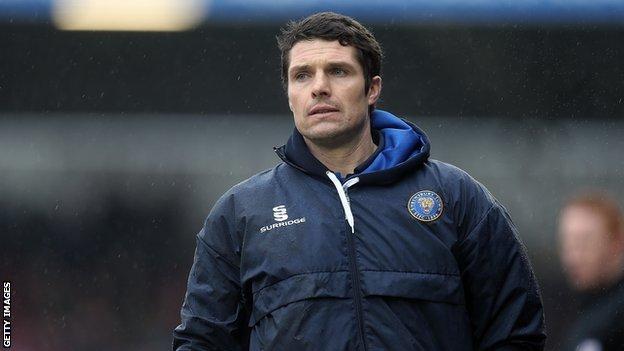 Shrewsbury Town boss Mike Jackson has hinted that a number of off-field issues have hindered their fight for League One survival.

The Shrews are six points from safety with only two games left and look likely drop to League Two.

Although he would not elaborate, Jackson told BBC Radio Shropshire other things have worked against them.

"A lot's gone on behind the scenes over the last couple of months but it's not the right time to say," he said.

Jackson, 40, was appointed manager until the end of the season in February following Graham Turner's resignation.

In 17 games in charge, the Shrews have won only three times and recent defeats to Tranmere,Crewe and Preston have dropped Town firmly in the mire.

"This club's in a bad position, we're right up against it now.

"It's not mathematically certain but we need to win two games and hope everyone else loses theirs."

Despite the predicament facing his side, Jackson still hopes they can pull off the seemingly impossible.

"Obviously it's going to be unbelievably difficult but we've got to do better than we have done," he said.

Jackson knows that things have been tough for his players but is hoping, that if relegation does happen, they can reflect on their efforts with honesty.

"When they sit on their beach towels this summer they'll know whether they've given everything they can give - you've got to be honest with yourself."

Shrews take their survival bid into the penultimate game of the season against Peterborough - who know a win would clinch their place in the play-offs.

And Jackson says he wants to give the supporters something to cheer in what has been a fairly miserable campaign.

"We owe it to the fans. I feel sorry for them and all I can do is say we'll keep fighting until the end."