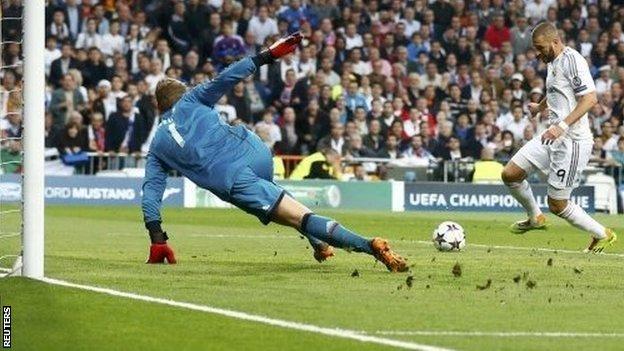 Real Madrid will take a narrow lead to Germany for the second leg of their Champions League semi-final thanks to a first-half goal from Karim Benzema.

Benzema scored against the run of play as Madrid extended their unbeaten home record in the competition to 18 games.

No side has successfully defended the Champions League title and Bayern have work to do to end that record after failing to threaten an away goal.

Pep Guardiola's side had most of the ball but Real spurned several chances.

"Real Madrid absorbed a lot of possession after Bayern completely dominated the game but the fact they didn't have their shooting boots on has probably cost them a good result.

"You have to give credit to Real because they have worked very hard and could have scored three goals themselves. Bayern at home are very strong so this tie is very finely balanced.

"It's not often you can say Bayern have been wasteful in the final third, but tonight it didn't happen for them. Up to the final third they were definitely the stronger side. It is all set up for a very exciting second leg."

Cristiano Ronaldo was among those who missed potentially vital opportunities for Real, who had lost four of their five previous semi-finals against Bayern, after returning from injury.

Gareth Bale was only fit enough to start on the bench following a bout of flu, and he had to watch Bayern dominate the first half to such an extent they had 80% of possession.

Yet for all that, the best chances came Real's way and they could have virtually put the tie to bed before the break had they been more clinical in front of goal.

Not that there was any lack of cutting edge in the way they opened up Bayern to take the lead.

The visitors might have thought they were about to take the lead when Toni Kroos met Mario Mandzukic's downward header with a goalbound volley. But Pepe got in the way to make the block and Real broke away with devastating effect as Ronaldo released Fabio Coentrao with perfect pass.

His low cross was perfect for Benzema to side-foot home his 24th goal of the season and 17th in Champions League games for Real.

Lineker pins hopes on a goal

After promising at half-time to get his ears pinned back if the scoreline between Real Madrid and Bayern Munich remained 1-0, former England striker Gary Lineker tweeted: "Oops! My big mouth has done for my big ears!"

Benzema then turned provider as Bayern were caught out again on the break but Ronaldo failed to keep his effort down from 15 yards.

Bayern's defending was alarming at times and when Isco's deep cross eluded everyone just before the break, Angel Di Maria should have punished them again but he volleyed wastefully over the top from the corner of the six-yard box.

The second half started in similar vein with Bayern seeing almost all of the ball but with Ronaldo getting a sight of goal with an angled shot which was saved by Manuel Neuer.

The Portuguese, who had missed the previous four games with a hamstring injury, tested Neuer again from a rare Madrid attack before making way for Bale with 17 minutes remaining.

How the game was won and lost

Bale's last game had seen him score Madrid's stunning winner in the Copa Del Rey final and the Wales international helped give his side some late attacking threat.

But Bayern came closest to scoring with six minutes to go when Mario Gotze was picked out by Thomas Muller. The substitute had only Iker Casillas to beat from eight yards out but could not find a way past the Madrid captain, who made a fine save diving to his right.

Muller then claimed a late penalty when he went down as he was about to shoot but English referee Howard Webb waved away his appeal.

Madrid held on and must hope their missed chances do not prove costly as they hope to repeat their sole semi-final success over Bayern in 2000, which led to the eighth of their nine European titles.

The winners will play either Chelsea or Atletico Madrid, who drew their semi-final first leg 0-0, in the final in Lisbon on 24 May.