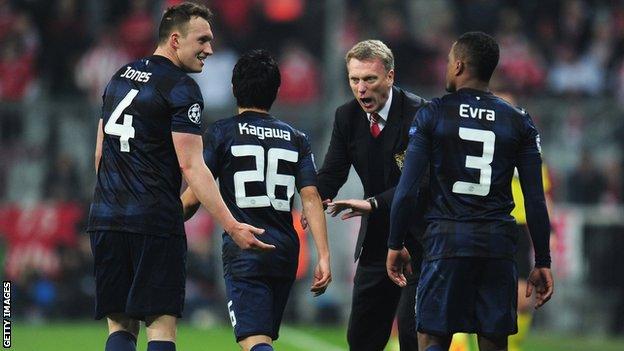 David Moyes will forever have the Manchester United farrago on his record.

Like the city of his youth it will be burned into his consciousness. Watching Moyes these past months has been like blood-sport at times, with the former manager being the hare at the course.

But this doesn't need to be a terminal blow to his reputation. He will bounce back, but surely as a manager pushing against the tide rather than attempting to ride the wave among the elite. Football is a savagely cruel game but 10 wretched months at United will not totally obliterate 10 decent years at Everton. There will be respite for him.

Moyes became an admired operator, in part, because of his street-smarts, his spirit of the underdog which always jarred with his life among the aristocrats at Old Trafford. Some managers are born for the big time - Sir Alex Ferguson, Jose Mourinho, Pep Guardiola. Moyes deserved his shot, but even in 10 short months it was clear that he wasn't cut from the same cloth as those men.

He needs to return to what he is good at - the life of an underdog. A few years back, when he was less haggard and more content he spoke about his early years growing up in a Glasgow tenement and the tyranny of the 'close', the dark passageway leading from the street to the stairway to his front door.

"Unless you come from Glasgow you don't really know what a 'close' means," he said in The Management, a study of Scottish football bosses.

"A close was somewhere where you sometimes felt frightened going up it. It could be dim going up a close, it could be dark. Who was hiding in the back yards? So you would run up the stairs because of a little bit of that Glasgow fear in the close. You had to be tough. Not physically tough, mentally tough."

Moyes said he learned how to anticipate danger in his life. When he was a young Celtic player he'd have to run free of enemy fans while returning from training via a Rangers-supporting enclave of the city.

"We were desperate for no-one to see our green Celtic bags. So you were edgy all the time," he recounted. "You had to have your wits about you. You were taught that you had to be able to run, you had to be sure that nobody caught you. Glasgow was keeping you alert, keeping you alive to what you were doing."

This quality, he explained, was a major benefit to him when he became boss of Everton. He had been a journeyman footballer whose achievements in management would have done nothing to raise the eyebrows of some of his new charges at Goodison Park, players like Paul Gascoigne, David Ginola and Duncan Ferguson.

"It was the Glasgow upbringing thing again," said Moyes. "I'm looking around. I'm thinking, 'I need to have my wits about me here. Is someone going to jump out of the close at me?' That's how you go into a dressing room.

"But an old friend once said to me, 'You can't go on stage unless you've got an act'. You have to be able to go out there and do the act. Earn that respect. You have to win and find a way of winning and getting people on your side."

But what happens when people see through the act? What happens when your once finely-tuned antennae stop twitching at the suggestion of jeopardy? If Old Trafford was that old Glasgow tenement then there was no shortage of players hiding in the close - and Moyes lost his ability to sense their presence and do something about it.

The younger Moyes had a survival instinct. The older version had something akin to a death wish. Dispensing with Sir Alex Ferguson's backroom staff might have been part of 'the act', the display of authority to bring the stars in his dressing room to heel, but without victories there was only vulnerability. And when results go wrong, professional footballers prey on a manager's vulnerability.

Moyes is, at his essence, a scrapper, a street fighter. He changed clubs last summer, but he never changed philosophy. You always felt that underneath that Manchester United tracksuit there was a little piece of the blue of Everton, for part of him remained rooted at Goodison Park.

He valued endeavour and graft over United's stock-in-trade, pace and movement and ambition and incredible self-belief. He set his team up not to lose rather than going out to win - and win with style. He was almost apologetic in the role, forever talking about 'hoping' to do this and 'trying' to do that. It was like he knew he'd been over-promoted and was desperately attempting to convince himself, his team and the supporters that he wasn't and that improvement was waiting just around the corner.

He was uncomfortable and unconvincing right from the start. The act bombed almost from day one.

Football management is full of unfair and inexplicable sackings, but this wasn't one of them. There was sympathy for Moyes, the man of integrity, but little for Moyes the football man. There was no getting away from the fact that he was out of his depth at Old Trafford.

There are Premier League clubs that would be glad to have him. Maybe not top-six clubs, but clubs run by people who will see beyond a nightmarish period in an otherwise fine managerial career.

The Everton of today has at its foundation a spine of valuable players that Moyes bequeathed them. Leighton Baines, Seamus Coleman, Ross Barkley, Kevin Mirallas. Much has been made - rightly so - of the spectacular amount of money that Moyes spent on signing Marouane Fellaini for United, but it would be unfair to belittle his transfer acumen on the apparently wasteful splurge on the Belgian. There is more to his record than The Lampshade.

His replacement at Everton, Roberto Martinez, is hot right now, understandably. But let's see how Martinez fares if, or when, his best players are sold and he has to rebuild. In the rush to describe how awful Moyes was at United we shouldn't forget that he left Everton in pretty rude health.

Moyes was at his best when fighting budget restrictions, when forced to duck and dive and make do, occasionally giving the big boys a bloody nose and always in the hunt for the tag of best of the rest. The life of the underdog suited him. He knew where he was in that world. And that's where he needs to get back to.