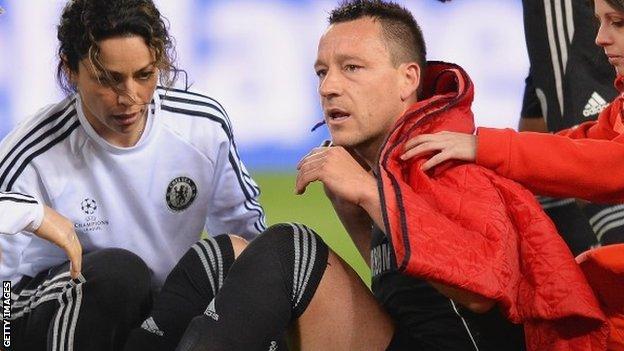 Terry went off with a foot problem while Cech injured his shoulder in the 0-0 draw with Atletico Madrid.

Manager Jose Mourinho said Terry would only play again if the Blues made the Champions League final on 24 May.

The Premier League campaign ends on Sunday, 11 May.

Cech, 31, came off after just 18 minutes following a collision with Atletico's Raul Garcia and was replaced by 41-year-old Mark Schwarzer, making his Champions League debut. Terry was replaced by Andre Schurrle with 18 minutes left.

Chelsea are also vying for the Premier League title as well as Champions League honours.

Second in the table with three games remaining, they travel to league leaders Liverpool on Sunday before hosting Atletico in the second leg of the semi-final next Wednesday.

Mourinho was already without several players for the game in Madrid. Striker Samuel Eto'o (knee) and midfielder Eden Hazard (calf) were both injured, while defender Branislav Ivanovic was suspended.

For the return leg next week, Frank Lampard and John Mikel Obi will both be banned after being booked during Tuesday's match..

"We didn't start the game thinking of a 0-0, but the game goes in a certain direction where you feel you have to be safe, don't concede and try to score in one of the few chances you create."

Atletico boss Diego Simeone admitted his team struggled to break down their opponents but remained confident ahead of next Wednesday's match at Stamford Bridge.

"It was impossible," said the Argentine. "They did their job really well and this leaves the qualification open.

"They will be playing at home, they will be feeling better and we will have to wait till next week to see what happens."