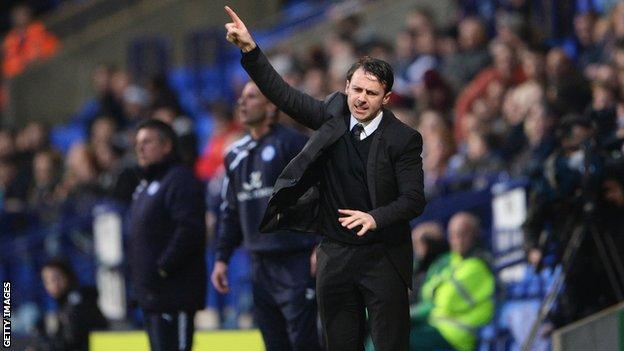 Bolton manager Dougie Freedman says he will need to reduce his playing budget at the end of the season.

Boosted by a number of loan signings, Bolton have recovered from a poor start to lie 14th in the Championship.

And Freedman told BBC Radio Manchester: "Everybody wants to have the best players, but I can't argue one minute about getting the debt down and then the next minute putting it up."

Middlesbrough striker Lukas Jutkiewicz has been particularly impressive since joining on a temporary basis in January, scoring six goals in 17 outings for Wanderers.

Cardiff forward Joe Mason, Leicester midfielder Neil Danns and Aston Villa full-back Alan Hutton have also made significant impacts, but Freedman has warned that he must consider the financial implications before attempting to add any of those players on permanent deals.

Additionally, a number of first-team players, including club captain Zat Knight and winger Chris Eagles, are approaching the end of their contracts.

Speaking after Tuesday's 1-0 home defeat by Leicester, he continued: "We're going to have to wait until the summer and see what we can wheel and deal.

"There are a few contracts up and I can tell you openly that the money situation has to come down. We have to look at that, and when we get our house in order that way, we're going to have to look at keeping people and getting people in for the right money."

The 39-year-old Scot says he will "embrace" the task ahead and hopes to repeat the success he enjoyed at previous club Crystal Palace.

The Eagles were in the Championship play-off places when Freedman departed for the Reebok Stadium for Bolton in October 2012, and won promotion under Ian Holloway before being stabilised in the Premier League by Tony Pulis.

"We're going to have to find a rough diamond and polish them up, and that's the challenge for me, but I'm very confident I can do that," added Freedman.

"If you look at my previous club, people like Yannick Bolasie and Mile Jedinak are playing in the Premier League now. I don't feel afraid of it. I feel I can embrace it and take it on."