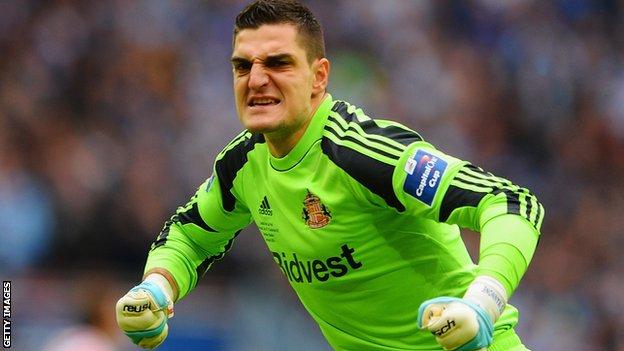 Goalkeeper Vito Mannone has said Sunderland have "given themselves a chance" of Premier League survival with four points from the last two games.

Sunderland ended a run of five defeats with a 2-2 draw at Manchester City and followed that result with a 2-1 victory at Chelsea last weekend.

"Everybody thought we were relegated, but we're not," Mannone, 26, told BBC Newcastle.

"We gave ourselves a massive chance and now every game is a massive game.

The battle at the bottom

"We take each game one at a time - we need to fight and prepare for these games properly."

Signed from Arsenal in the summer, the Italian was initially brought in to deputise for Keiren Westwood but was thrust into the first team after the Republic of Ireland international was injured in November.

Sunderland supporters have named Mannone their player of the year in a season in which the club reached the League Cup final thanks to his shoot-out heroics against Manchester United in the semis.

His compatriot Fabio Borini, a Wembley scorer despite their final defeat by Manchester City, picked up the young player prize.

Borini is likely to return to parent club Liverpool at the end of the campaign, meaning the final four games of the season - starting with Cardiff on Sunday - will probably be his last in Sunderland colours.

"From the beginning it seems like a negative season but it could be very positive," Borini said.

"We are going for the three points, that is all that matters in a Sunderland shirt. I hope that is the way it could end."