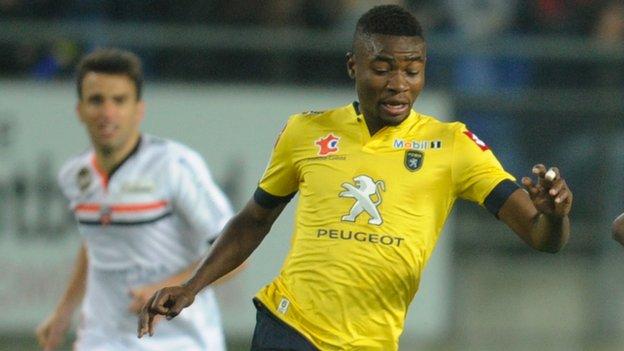 Zambia midfielder Nathan Sinkala hopes to stay at Sochaux beyond the end of his loan from TP Mazembe.

The 22-year-old joined the French side in January and is due to return to the Democratic Republic of Congo at the end of the season.

"I'd love to stay with Sochaux that's why we are working hard to remain in the top league, which is very important," Sinkala told BBC Sport.

"Playing in France is good for my career and development."

Sinkala has settled well to life in the French city of Montbeliard and appears to be thriving in a more challenging environment.

""I'm enjoying my football here in France and to be honest with you the difference is very clear - you can't compare football in Africa to what is here.

"Hopefully, when the season is over and Sochaux manage to stay in this division then we can sit and decide if I can stay."

Sinkala has benefitted from arriving at Sochaux alongside his former TP Mazembe club-mate and fellow Zambia international Stoppilla Sunzu - and the pair have been reunited with ex-Zambia coach Herve Renard.

That familiarity has paid dividends for Sinkala, who was made 12 league appearances for Sochaux.

"It feels good to work with Herve Renard again. It's like a family reunion for us [alongside Sunzu], because he knows us very well," he said.

Sinkala won the 2012 Africa Cup of Nations under Renard, but Zambia crashed out in the group stage in defence of their title in 2013 and were also eliminated from 2014 World Cup qualifying at the group stage.

However, the midfielder insists the Chipolopolo have decided to put the disappointing year behind them and regroup for the next Africa Cup of Nations campaign.

"We are looking forward now because at the last Nations Cup we disappointed our people. It's important for us to do Zambia proud at the next tournament in Morocco," he said.

"All the players know that we owe our fans and must really make them happy once again."

Zambia are one of 21 nations who have qualified automatically for the group phase of qualifying process for the 2015 Africa Cup of Nations in Morocco.

They will know their opponents when the draws take place on 27 April in Cairo.