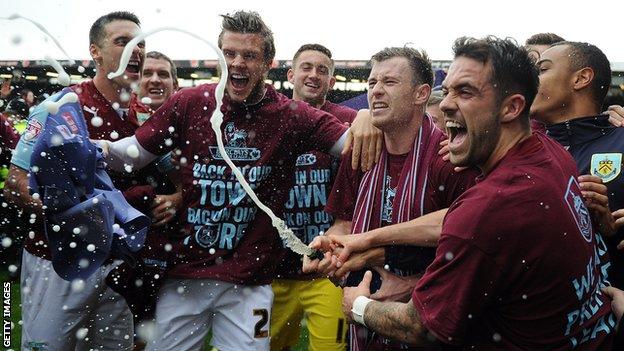 Burnley manager Sean Dyche must not be too loyal to the players that won promotion to the Premier League, says ex-Clarets midfielder Paul Weller.

Dyche's side confirmed a top-two spot with victory over Wigan on Monday.

But Weller told BBC Radio Lancashire that decisions must be made on several players before their top-flight return.

"If you don't think they're going to fit into your system and the way you want to play going forward, you've got to be ruthless," said the 39-year-old.

Paul Weller spent more than a decade playing for Burnley, appearing in more than 250 league games and helping the Clarets win promotion to the second tier in 1999-2000

Burnley have used just 23 players in the Championship this season and Weller, who played more than 250 league games for the Clarets and helped them win promotion to the second tier in 2000, believes reinforcements will be needed in the summer for the club to be competitive in the Premier League next term.

He continued: "You've got to be looking at eight, nine or 10 [new] players.

"A lot of Burnley fans will think that's a little bit too much to blend into your team, but you're probably going to keep your starting 11 and give them a go at the start. You're going to change your back-up players to quality players."

And Weller hopes Dyche takes a different recruitment approach to Owen Coyle, who was the last manager to lead Burnley into the Premier League in 2009.

"Coyle started to bring players in for the future, and that's not what you want," he added. "You want them to be for now. In the future, you never know where Burnley are going to be."