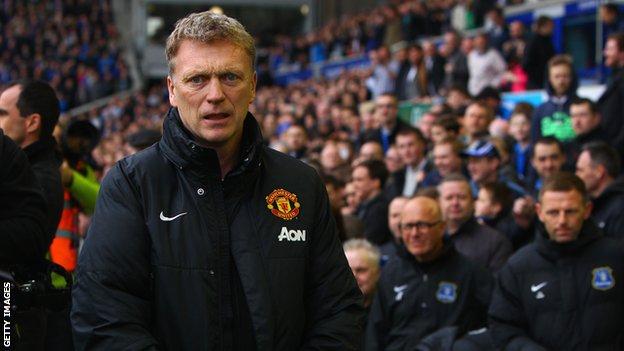 Manchester United opted to sack David Moyes because they did not want to start the search for a successor behind his back, the BBC has learned.

Having decided Moyes had to go after Sunday's 2-0 defeat at Everton, senior club figures felt it would have been "disrespectful" to begin the process while the Scot, 50, was still in post.

Despite criticism by the League Managers' Association for the "unprofessional" way United handled the sacking, the club are convinced it was the right decision at the right time.

They had become concerned at the lack of fight and spirit among the team and it is understood the board of directors had lost confidence in the ability of Moyes to motivate the players and therefore turn things around.

Executive vice-chairman Ed Woodward will now lead the search for a new manager but will seek the advice of senior United board members, including Sir Alex Ferguson, who hand-picked Moyes.

Real Madrid manager Carlo Ancelotti, Netherlands boss Louis Van Gaal and Atletico Madrid's Diego Simeone are among the names to have already been linked with a move to Old Trafford.

It is understood Woodward will keep an open mind about potential candidates and will consider managers even if they are under long-term contracts, although there is an acknowledgement from inside the club that this may make it harder to secure a deal. That would mean an approach for Chelsea manager Jose Mourinho cannot be ruled out.

The club does not want to place a deadline on the search but are keen to make an appointment sooner rather than later.

That would seem to suggest Van Gaal, out of contract with Holland after the World Cup in the summer, may emerge as the most likely candidate, although there have been reports that some senior players are concerned about his strict approach.

With pressure on United to bring in new talent this summer, the club are even prepared to sign players without a new manager being in post.

United began to lose confidence in Moyes following the 2-0 Champions League defeat against Olympiakos in February.

While results since that game did not improve, he may have earned a reprieve if he could have shown United were starting to move in the right direction on the pitch.

Those signs never came and defeat by Everton confirmed what many United board members were already fearing: that Moyes would not be able to turn the situation around.

Although newspaper websites started to run stories just after 14:00 BST on Monday that Moyes was about to be sacked, it was not until late afternoon that Woodward spoke to Moyes.

It is understood he told him that he was unable to provide him with any reassurances about his position, admitted there were concerns and that conversations about his future were ongoing. At that stage, though, the club insist no final decision to remove him had been taken.

Instead, Woodward asked Moyes to meet him at the club's Carrington training ground early the next morning. At that point, he was dismissed.