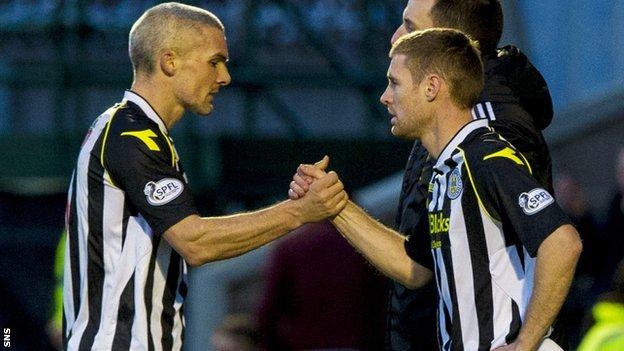 David van Zanten believes St Mirren's appeal against Jim Goodwin's red card was not only a fight for justice but vital to their survival battle.

The Buddies captain was sent off for a late challenge on Hibernian playmaker Kevin Thomson in Saturday's 2-0 win.

An appeal leaves the midfielder free to face Partick Thistle at Firhill.

"He is vital to us and he would have been a big loss to us if he wasn't playing on Friday night," said St Mirren defender Van Zanten.

St Mirren are in eighth place in the Scottish Premiership, two places above Thistle, but only three points separate five clubs seeking to avoid a play-off against a Championship club to avoid relegation.

Van Zanten believes justice will be done if the appeal on behalf of his fellow Irishman is successful and he avoids a suspension in the crucial final four games of the season.

"He's our captain, he's our leader on the park and we're definitely a better team with him in it," the 31-year-old right-back told BBC Scotland.

"He is constantly talking, giving out orders on the pitch and it's vital you have someone like that, especially in the middle of the park, where Jim plays.

"Other managers have said certain things about him because he does his job so well against them - he riles the other teams' players up because he gets in and about them.

"He is a fully committed player and he's definitely one you would want in your team rather than playing against you."

Van Zanten has not played since the end of January and two straight wins have meant he has been left frustrated on the bench since returning from injury.

"It's very difficult sitting on the sidelines watching games," he admitted. "When the team are winning, it's easier to take. But, when they're not winning and not playing well, it's been frustrating at times to not get back in.

"But I've just been getting my head down and trying to get on with it and working hard in training.

"The boys obviously got a good win last week, so I can't see too many changes to be honest.

"The situation we find ourselves in, it would be great if we could go on a run now and get ourselves out of it as soon as we can."

Van Zanten was pleased that pressure and speculation over the future of manager Danny Lennon had subsided.

"Two wins have obviously put a stop to that talk and it's nice to get a break from it to be honest and concentrate on the games coming up," he admitted.

Despite being in a fight against relegation, St Mirren could yet finish seventh, which would be their best top-flight finish since the 1988-89 season.

"It is kind of strange that that's still possible, because there's been so much negativity around the team this season," added Van Zanten.

"I think everyone has been disappointed with how it's gone so far, so we've got a chance to make up for that.

"We've managed to keep the team spirit very high and it's a testament for the players for doing that. We've stuck together through it all and it's starting to show in our performances."