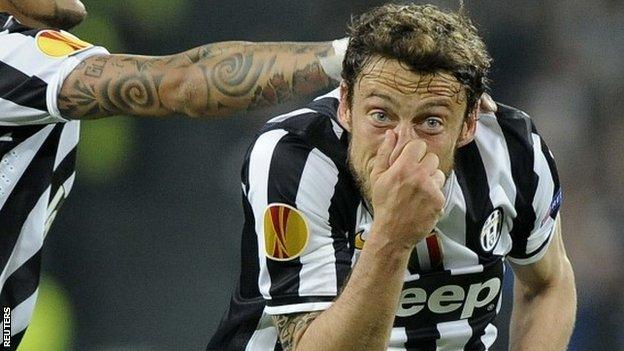 Midfielder Claudio Marchisio hopes the prospect of a home final and the end of a European trophy drought will propel Juventus into the Europa League final.

Juventus face Benfica in the last four - the first leg is in Lisbon on Thursday - as they look for their first major European success since winning the 1996 Champions League.

The winners will face Sevilla or Valencia in the Turin final on 14 May.

"The fact the final would be at home is an added boost," said Marchisio.

Juventus, who won the Intertoto Cup in 1999, are also on course for a third successive Serie A title as they hold an eight-point lead over AS Roma with four games to go.

But despite their exertions in trying to defend their domestic crown, Marchisio believes the incentive of lifting the Europa League title on home soil drives the team on.

"Many players in this team have never won a European competition and Juventus haven't won a trophy in Europe for so many years," the Italian international, 28, told UEFA.com.

"Even if we're coming to the end of the season and our legs are beginning to feel heavy, the trophy can give you that energy to give that bit extra."

Like Juventus, Benfica, who are at home in the first leg of their semi-final on Thursday night as the two clubs meet for only the third time, also joined the Europa League after failing to reach the knockout stages of the Champions League.

The Eagles won the Portuguese title for only the fourth time in the last 20 years last weekend and are now looking to go one better than last season's defeat in the Europa League final to Chelsea.

Benfica will be without Argentine midfielder Eduardo Salvio, who broke his arm in the title-clinching win over Olhanense, as they chase a first European success since lifting the European Cup in 1962.

Former Manchester City striker Carlos Tevez may be fit for Juventus after missing their last two games with a thigh injury, while midfielder Arturo Vidal could also be back after a knee problem.

Sevilla are at home in the first leg of the all-Spanish semi-final.

They go into the tie as the form team after winning nine of their last 10 games in La Liga to climb to fifth and challenge for a place in next season's Champions League.

Valencia, beset by financial problems, are currently eighth in the table after winning just one of their last five league games.