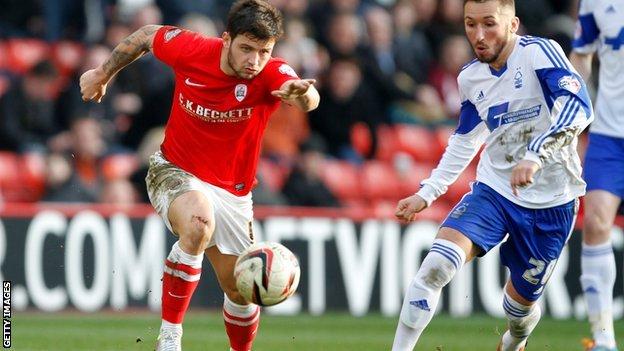 Dale Jennings, by his own admission, is not a man to shirk a challenge.

Aged 18, the forward swapped Birkenhead for Bayern Munich when he left Tranmere for one of the biggest teams in world football.

It was a decision he made without hesitation.

"I heard that Bayern had put a bid in for me and it didn't really surprise me that much because I had been doing well," the 21-year-old Barnsley forward, the Football League's Young Player of the Month for March, told BBC Sport.

"The manager Les Parry asked me if I wanted to know more about the other teams and I just said 'no, I'm going there'.

"A lot has been expected of him when you consider he is still a young lad. He has handled it very well and I hope he can come to the fore and keep us in the division.

"He has played exactly as we have wanted him to.

"The more games he gets under his belt and the more experience he gets the better he will become."

"They're one of the biggest clubs in the world and I knew they were the right ones for me. I wanted a change and I wanted to move away and concentrate on my football a bit more."

A season that had started in the Prenton Park side's youth team before a "surprise" call up to the first team ended with a move to the Allianz Arena.

The diminutive ball-carrying teenager looked set for greatness, but his time in Germany was ruined by injury problems.

"When I first went and took my medical they found a hernia and it put the move in doubt," he said.

"The doctors said they could fix it but it made things difficult because I wanted to be out on the training pitch.

"I was in the physio room and with the doctors and then when I got fit I got another injury three weeks later and was out for another six weeks."

Ultimately Jennings never made a first-team appearance for Bayern, though he did play 36 times for the club's second side in the German fourth tier.

By last January, 18 months into his three-year deal, he realised it was over.

"I had a year left on my contract and I had to think 'am I really going to get in this team?' Once my girlfriend was pregnant I knew it was time to come back," said Jennings, now father to baby Mila and engaged to long-term partner Hayley.

"Realistically I might have ended up wasting the year and then coming back over at 21 and finding it hard to get a new club over here."

Despite his own difficult experience Jennings has no regrets about his Bavarian experience.

"I'd tell a young player in my position now to take the chance and go for it," he said.

"People ask me if I have regrets about going and I say 'no'. I think I would have had more regrets if I had turned it down because you don't know what is going to happen."

Having set his sights on a return to England he signed for Barnsley in June; keen to prove himself in the Championship.

A little too keen.

Having come off the bench in the 61st minute for his Tykes debut on the first day of the season, he was heading down the tunnel just five minutes later after a strong challenge on Wigan's Shaun Maloney saw him sent off.

"I felt like I'd let everybody down when I was walking off the pitch," he recalled.

"Personally I thought it was a good tackle and I couldn't have lived with myself if I'd have backed out of it. I'm not the sort of player to shy away from a tackle.

"It wasn't the best start but I'm here now and doing well and that's the main thing."

Given what had gone before it was just the kind of start Jennings did not need.

He was loaned out to Karl Robinson's MK Dons and his six appearances in League One helped put things back on track.

When he returned to Oakwell in January the Tykes had changed manager and Danny Wilson, in his second spell at the club, just happened to be a Jennings fan.

"I'd seen him playing on loan for MK Dons prior to coming here and he was doing very well," Wilson said.

Brits in the Bundesliga

"He has a dynamic way of playing and I thought that he would be a big bonus and a big help to us and he has been. He's been fantastic."

So fantastic that Jennings, who credits Wilson with restoring his self-belief, was awarded the Football League's Young Player of the Month award after scoring three goals in seven matches in March.

He admits that getting on the scoresheet for the first time this season, in the 1-0 win over Nottingham Forest on 8 March, was a huge release but, as ever, things have not been straightforward.

A run of one win from their last six matches has left them four points adrift of safety with two matches to play.

Realistically the Tykes must win Saturday's game at Middlesbrough and beat QPR at home a week later if they are to have any chance of surviving.

"We have to go all out and take risks and take chances," Jennings concluded.

"We've got to have belief in ourselves and hope that the teams around us don't pick up points."

The situation might look bleak, but if anyone knows anything about taking a risk, then it's Barnsley's former Bayern man.