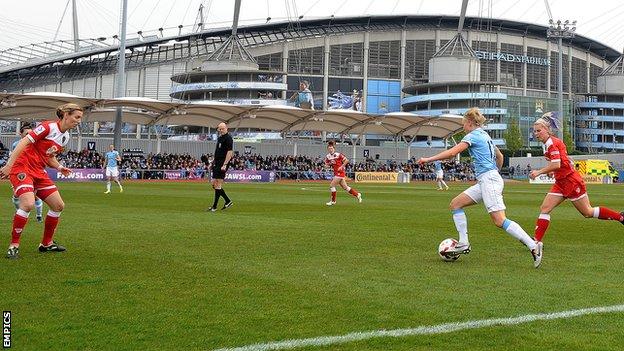 Manchester City Women manager Nick Cushing says he is disappointed, but not worried, by their slow start to the Women's Super League season.

After defeats by champions Liverpool and 2013 runners-up Bristol Academy in their first two games, City are the only club without a point in WSL 1.

City are also yet to score in their debut season in the top flight.

"We were aware that the project was going to take time," Cushing told BBC Radio Manchester.

"It [the lack of goals] is not a worry. We've scored enough in pre-season to show us that we've got goals in us.

"The players need to understand that they may need just to apply themselves a little bit earlier in games. We've started slowly in both games, and if we start a bit quicker, we'll be better."

City recruited four England internationals - including captain Steph Houghton and prolific striker Toni Duggan - ahead of their first season at the top level.

But they lie bottom of the table after a 1-0 loss at Liverpool and Sunday's 2-0 reverse against Bristol at the Manchester Regional Arena, which is located next to the Etihad Stadium.

One encouragement for Cushing was an attendance of 1,253 for the club's first home match in WSL 1, although that only added to the frustration of the defeat by Bristol.

He continued: "The disappointing part is that we've spoken a lot about wanting people to watch and then come back and watch us. We need to show them that we're a lot better than what they saw on Sunday.

"We have a team that's working tirelessly behind the scenes to get people through the gate and they're doing a fantastic job. We're just disappointed that our job on the pitch didn't replicate that."