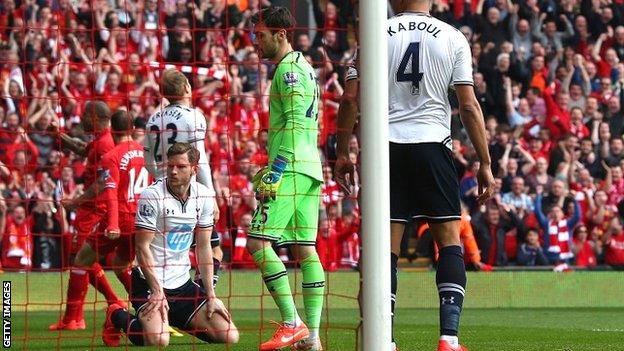 Spurs are sixth in the Premier League but took only one point from 24 against the top four, with losses including a 6-0 thrashing at Manchester City.

France international captain Lloris, 27, said: "We had a lot of bad defeats. We have to show more character.

"It will be difficult to do worse [next season], especially against the top four or five teams."

Having twice finished fourth with Harry Redknapp as manager, Spurs were fifth last term under Andre Villas-Boas when frequently inspired by Gareth Bale, who scored 21 goals in 33 matches.

With Bale leaving to join Real Madrid for a world record fee of £85.3m, they recruited seven overseas players, none of whom had previously played in the Premier League.

Performances were criticised and there were some heavy defeats, the most severe of which was at the Etihad in November, while a 5-0 loss at home to Liverpool the following month was the catalyst for the sacking of Villas-Boas.

Development coach Tim Sherwood was installed as manager and given an 18-month contract, but he has been the subject of speculation over his future and saw his side beaten at home 5-1 by Manchester City, and 4-0 at Chelsea and Liverpool.

Lloris, who joined Spurs from Lyon in 2012, added: "We sometimes had the feeling that we gave up this season. In this league you have to be 100% every time.

"We can't allow this kind of behaviour."