Liverpool are still scoring lots of goals, have won 11 games in a row, and are seven points away from guaranteeing their first title in 24 years.

With the finish line in sight, Blues boss Jose Mourinho would usually be the last manager you would want to come up against.

Mourinho did a job on Manchester City in February, winning 1-0 when they were the team in form, but there are a few reasons why that is a lot less likely to happen again at Anfield.

This does not feel like the title showdown it was shaping up to be because even a Chelsea win will not put things back in their own hands. Mourinho has already said that next week's Champions League semi-final second leg against Atletico Madrid is his priority. I can understand why.

Another reason this game could not have come at a better time for Liverpool is that Chelsea have injuries and suspensions in key areas. As we have found out over the last few weeks, the Reds have the attacking players to punish any kind of defensive weakness.

Reds boss Brendan Rodgers called Raheem Sterling the best young player in Europe after his performance in their win over Norwich last week. The way he is playing right now, you have to believe him.

It is clear Sterling has been improving all season but, against the Canaries, he showed the different sides he now has to his game.

There was his finishing, with a 25-yard strike for Liverpool's first goal; then his sensational pass to set up Luis Suarez for their second and. Finally, there is his running with the ball that saw him get the third.

I have already talked about how Rodgers's flexible formations have put them on top of the table and Sterling's own versatility plays a huge part in making them as effective as they are. Teams do not know where he is playing, or how to stop him. 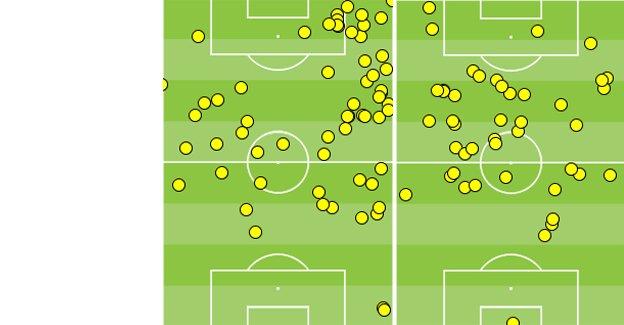 In the last few weeks, Sterling has been used out wide when needed - notably against Tottenham where he played mainly on the right but sometimes switched wings with Suarez - in a 4-3-3 formation.

But his best performances have come when he has played through the middle, using the space between the opposition midfield and defence, and looking to run in behind their back line.

Against Manchester United and Manchester City he played at the tip of a midfield diamond behind Luis Suarez and Daniel Sturridge while, against Norwich, he was alongside Philippe Coutinho and playing off Suarez in what started as 4-3-2-1. He has been brilliant in all of those matches.

At the start of the season I thought of Sterling as a winger and did not see him playing in that 'number 10' position at all.

The player he has become shows what hard work on the training ground can do.

You have to give Rodgers massive credit for developing his game in the way he has, and also to Sterling for his dedication to improve himself.

From a shaky start under Rodgers, who gave him a dressing down in front of the TV cameras in a documentary that was being made about the club in the summer of 2012, Sterling has worked hard, shown great character and come back to prove himself.

He was not a regular at the start of the season but has kicked on so much since coming back into the team at the start of December that he has to be one of the first names on the teamsheet now.

Sterling is only 19 but has emerged as a key player, as important to Liverpool's title bid as Suarez, Sturridge or Steven Gerrard.

Like those three, he has different dimensions to his game. He offers a different threat to Suarez and Sturridge and has hit form at exactly the right time to freshen up the Liverpool attack for the run-in to the end of the season.

Sterling's pace is phenomenal but the reason he is such a dangerous player through the middle is not simply because he is fast.

It comes down to the timing of his runs from deeper positions - like the one he made when he scored against Manchester City - and the different angles at which he comes in.

There is an end product now too. The way he manipulates the ball is fantastic and his finishing seems to get better and better.

I remember him missing a great chance when Liverpool lost at Etihad Stadium in December, when he skied the ball with only Joe Hart to beat, but he has looked cool in front of goal recently.

Sterling has found the net six times in Liverpool's 11-game winning run - and at some crucial times in those matches: the opening goals against City and Norwich for example.

His performances in the big games for Liverpool have been so good that it is not enough for him to just be part of Roy Hodgson's squad for this summer's World Cup - he has to be a starter for England in Brazil.

Rodgers to stick with winning plan

Sterling played on the right wing in a 4-3-3 formation when Chelsea beat Liverpool at Stamford Bridge on 29 December, but the Reds had Gerrard and Sturridge out injured that day and they look a different team now.

If Sturridge is fit, I would expect Rodgers to go with the same system and shape that saw his team beat Manchester City at Anfield, only using Joe Allen or Lucas Leiva instead of the suspended Jordan Henderson. 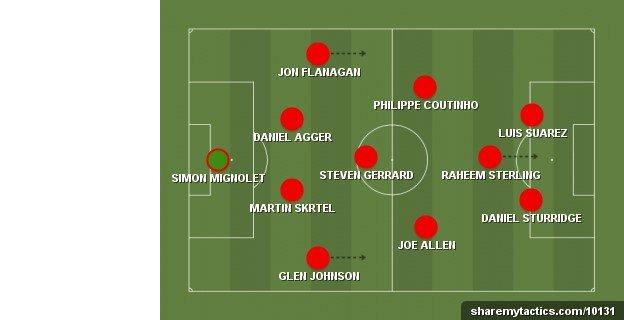 That would keep Sterling at the tip of their midfield diamond, in the position where he has been so wonderful recently, and his movement will create lots of problems for Chelsea.

The Blues' back four has been brilliant all season with John Terry and Gary Cahill, but they will be without Terry for their biggest test of the campaign. As usual, Liverpool will go for them right from the start.

David Luiz and Branislav Ivanovic have both played at centre-back before, but having an unfamiliar face alongside Cahill will not help them as a unit, and neither will Petr Cech's injury or Ramires' suspension.

On top of those absences, it is the timing of this game that will help Liverpool the most. It could not have fallen better for them than between the two legs of Chelsea's Champions League semi-final.

Mourinho knows he has a much better chance of reaching the Champions League final than he does of winning the Premier League title. Europe is his priority, and that will surely influence his selection for positions in which he still has a choice.

No Mourinho team is ever easy to break down, but where Chelsea are more likely to be weaker is when they go forward.

Like Sterling, Eden Hazard has had a brilliant season, and has made a dramatic improvement most of his attacking statistics compared to the 2012-13 campaign. Just as Rodgers deserves credit for Sterling's progress, Mourinho is clearly able to get the best out of the Belgian.

Hazard was superb against the Reds in December and, if he plays, he could easily be the difference between the two teams again on Sunday.

But Hazard is on his way back from a calf injury and, if he is going to be fit soon, surely Mourinho will want him be fit for Wednesday instead of this weekend?

In an ideal world, I am sure Mourinho would go to Anfield planning a repeat of the masterclass in counter-attacking that saw Chelsea beat Manchester City at Etihad Stadium.

But, without Hazard, Chelsea will be far less of a threat on the break. He is not just their top scorer, he has made more assists, creating more chances than any other Blues player.

This time, instead of thinking about winning, Mourinho might have to try to kill the game in the same way he did when picking up a point at Manchester United and Arsenal this season.

But my feeling is that Mourinho's tactics will be less relevant this time because his line-up will not be strong enough to carry out his game-plan. Besides, a draw would not help Chelsea much.

I see Liverpool winning again, to move one step closer to the title. And, if Mourinho cannot stop them, it is hard to see anybody else doing it now.

Everything has fallen nicely for Liverpool this weekend with Chelsea's circumstances, but the season is over 38 games, not just this one match.

Liverpool have been the best attacking team in the Premier League, have scored the most goals, and been a joy to watch. If the Reds do go on to become champions, they will fully deserve their success.