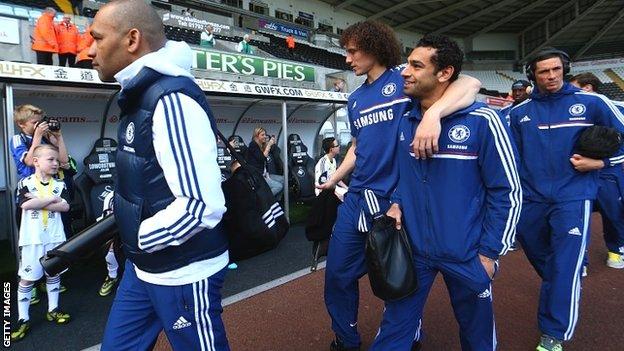 Chelsea are not expected to face punishment from the Premier League if manager Jose Mourinho decides to field a weakened team at Liverpool on Sunday.

League regulations have been relaxed since Blackpool were fined in 2011.

Action is only likely if they select several under-21 players not in their 25-man squad for Premier League games.

Mourinho has hinted he will prioritise Wednesday's Champions League semi-final second leg with Atletico Madrid, which is goalless after Tuesday's away leg.

With three Premier League matches remaining, Chelsea, who last won the title in 2010, are second, five points behind leaders Liverpool, and only a point clear of Manchester City, who have a game in hand.

Midfield duo Frank Lampard and John Obi Mikel could both feature at Anfield as they are suspended for the second leg against the Spanish team.

Nemanja Matic and Mohamed Salah have also been tipped to play against Liverpool because they are ineligible for European competition this season.

Goalkeeper Petr Cech and skipper John Terry will miss out through injury, but even with a team comprised mainly of fringe players, Chelsea's XI would be likely to be more expensive than Liverpool's in terms of transfer fees.

Mourinho has been charged with misconduct for comments he made following the defeat by Sunderland at Stamford Bridge last weekend.

Assistant Rui Faria has been handed two counts of misconduct after he had to be restrained from confronting referee Mike Dean during that match.

Midfielder Ramires has been charged following an off-the-ball incident with Sunderland's Sebastian Larsson.