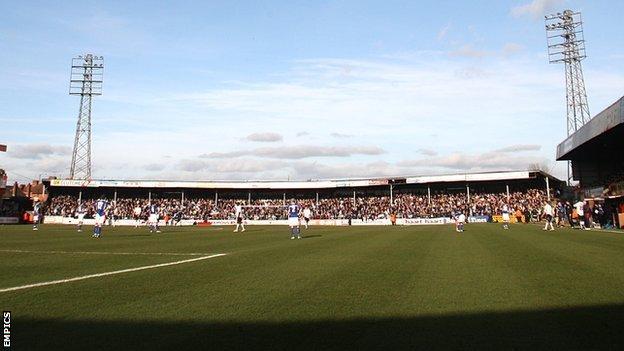 Hereford United Supporters' Trust says it has received a "substantial five-figure amount" as it seeks to take over the Conference Premier club.

Club chairman David Keyte recently said he would step down if the right offer to buy the club came along.

The Bulls will be relegated if they fail to beat Aldershot on Saturday.

"Members will be aware of the recent initiative by the Trust to seek financial pledges to see if there is a potential appetite for a bid. We have received a substantial five-figure amount in the opening 48 hours and continue to have strong interest from both Trust members and the wider community. In the coming days the Trust will vigorously pursue further pledges of support and review the position again early next week.

"The Board also took the opportunity to take a view on their ability to manage a future bid and possible take over of the activities related to running the football club. Various alternatives scenarios were identified and evaluated. Support had been offered from the football community in general both inside and outside the county. It was agreed that the early indications are that the Trusts ambitions could be achieved with support from interested groups."

"We were promised sensible budgets would be put in place last summer but they weren't," HUST spokesman Martin Watson told BBC Hereford & Worcester.

"We found out before Christmas that the budget actually had a £360,000 hole in it. That's not sensible.

"Over the last 18 months, the club has been constantly calling for cash.

"We're looking for pledges towards the Trust that we can use to clear the immediate debt, take over the running of the club and put a sensible plan in action.

"The club is up for sale for a pound, on the back of guaranteed investment into the club.

"The winding-up orders cannot and must not continue.

"We've got seven weeks left. This should have been a conversation that we had 12 months ago."

Monday's win against Alfreton kept the club's bid for Conference Premier survival alive, but Hereford's relegation fight is out of their hands.

A win for 20th-placed Chester against Salisbury would relegate Hereford regardless of the Bulls' result against Aldershot.

Despite averting the threat of a winding-up order for the second time this season, Hereford could still go into administration, with outstanding debts in excess of £220,000 and another winding-up petition expected in May.

In the event of the club going into administration, the subsequent 10-point deduction is now expected to be implemented for next season rather than affecting the current campaign.

Brewing company Heineken are among those to have donated money to help keep United afloat this season.