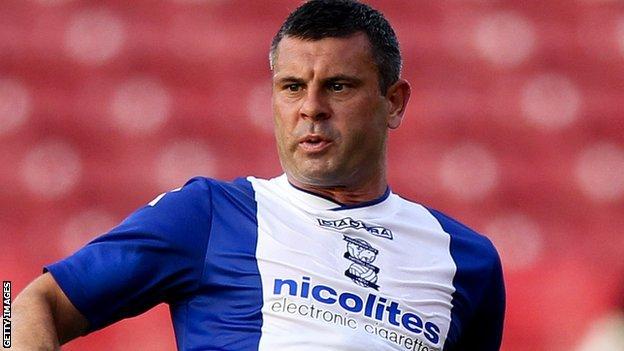 Birmingham captain Paul Robinson says the Championship strugglers' current group of loanees have let them down.

Robinson said: "The first batch of loan players were different class, buying into the gaffer's ethos and the team and what we expected from each other.

Defender Robinson added: "You don't want anyone out there now not giving 100%. The players that go out there have got to wear that shirt with pride."

The City skipper is currently serving a three-match suspension after receiving 15 yellow cards this season.

The Blues lie 21st in the Championship, above the relegation zone on goal difference.

Since the end of the January transfer window, 12 of Birmingham's 21 league goals have been scored by loan players, including nine for striker Macheda, now the club's top league goalscorer this season.

"The big clubs send these players out for a reason and that's to get first-team football," 35-year-old Robinson continued.

"For me, they've let the gaffer down, they've let us players down, some of them, and they'll just go back to their clubs and get on with it.

"That hurts the most because we're football players and we're brought up to love the game. Do these young kids love the game as much? I don't think so."

Manchester United forward Jesse Lingard scored six goals in 13 appearances for the Blues while on loan earlier this season.

Manager Lee Clark added: "Every loan player that's come here has the ability. That's not the point in what we're saying.

"All the first batch bought into Birmingham City. In the second batch we've had some who have done that as well but there have been others."

Your combined Arsenal and City XI

Have your say by picking your combined Arsenal Women and Manchester City Women XI, as the two teams meet in the Women's Super League on Sunday.