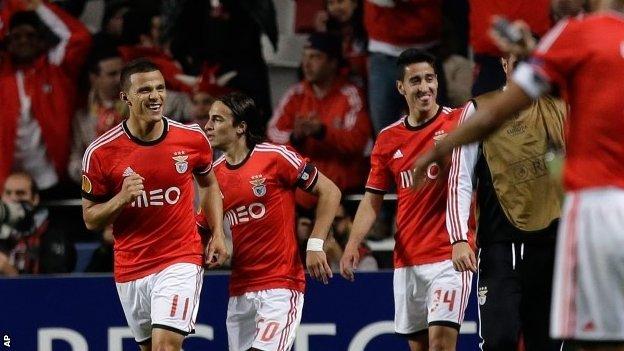 The hosts, who were crowned Portuguese champions on Sunday, went ahead early on as Ezequiel Garay's header crept in.

They did not make more of their first-half dominance and Carlos Tevez levelled for Juventus after shimmying thorough a packed penalty box.

Claudio Marchisio and Giorgio Chiellini both had chances to spoil the party, but Benfica just about escaped with their lead intact despite sitting back once again.

With the final to be played at Juventus Stadium, the visitors' ambitions of ending an 18-year wait for European silverware in front of a 'home' crowd were dented by Garay's early effort.

With less than two minutes on the clock, the Argentina defender rose above Leonardo Bonucci to head Miralem Sulejmani's corner past an unconvincing Gianluigi Buffon.

Juventus manager Antonio Conte played in the club's last match away to Benfica, back in March 1993. The Old Lady lost 2-1 on that occasion as well, but won the second leg en route to lifting the Uefa Cup.

The 27-year-old centre-back has long been linked with a move to Manchester United and, with his contract expiring at the end of next season, caught the eye with another polished performance.

His team matched those standards in the first half, pressing high and bristling with danger as they broke at pace,

Former Manchester United midfielder Paul Pogba was Juventus' most threatening player, but his energetic bursts down the right often left his team-mates behind as regularly as his opponents.

Juventus were kept waiting on the pitch as Benfica took their time to emerge for the second half, but the gamesmanship seemed to backfire as the Italians dominated after the interval.

Stephan Lichtsteiner's dangerous cross had been hacked clear by Maxi Pereira ahead of a lurking Claudio Marchisio before Tevez struck.

The former Manchester City striker's first touch initially seemed heavy from Kwadwo Asamoah's cutback but, as Luisao closed in, he feinted to shoot, skated round the defender and poked a finish between the goalkeeper's legs.

With parity and an away goal, Juventus might have hoped to shut the game down, but they could not hold out as Benfica roused themselves once again.

Just 11 minutes later, a slick attack ended with Lima burying an explosive shot beyond Buffon after a neat dummy from Ivan Cavaleiro.

The tie could have taken another twist but Marchisio and Chiellini shot straight at Artur with space and time to do better.