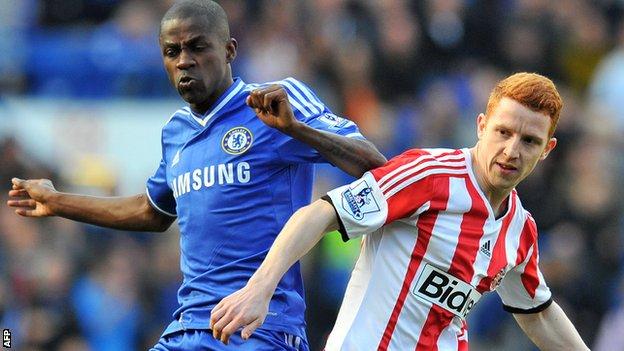 Chelsea midfielder Ramires will miss the rest of the Premier League season after accepting a charge of violent conduct.

The Brazilian was sanctioned following an off-the-ball incident with Sebastian Larsson in Saturday's 2-1 defeat by Sunderland.

The 27-year-old will serve a four-match ban after a review panel decision.

Ramires elbowed Larsson towards the end of the first half at Stamford Bridge but was not punished at the time.

But, after the incident was reviewed by a panel of former referees, Ramires will now miss Chelsea's remaining Premier League fixtures this term - against Liverpool, Norwich and Cardiff - as well as their first game of next season.

He is, however, eligible for the second leg of Chelsea's Champions League semi-final against Atletico Madrid next Wednesday.

Mourinho was charged with misconduct following comments he made after the match.

He congratulated both referee Mike Dean for his performance - which he described as "unbelievable" - and Mike Riley, head of refereeing body Professional Game Match Officials Limited, in a television interview.

The FA alleges that his comments call into question the integrity of Dean and/or Riley and/or bring the game into disrepute.

Faria, who had to be restrained from confronting Dean after Sunderland had been awarded what turned out to the match-winning penalty, has been charged with two counts of misconduct.

Both men have until 18:00 on Monday to respond to their charges.