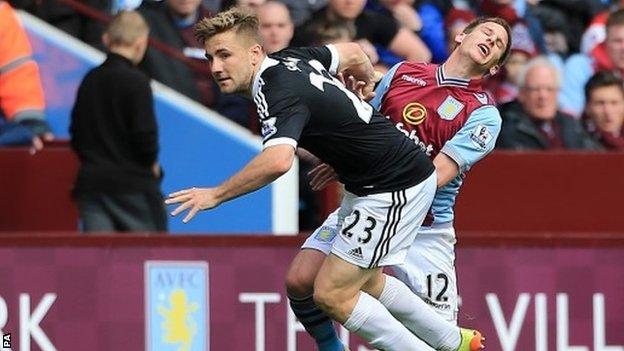 Southampton duo Luke Shaw and Adam Lallana are not in transfer talks with other clubs, says director Les Reed.

Left-back Shaw, 18, and attacking midfielder Lallana, 25, both made their England debuts this season and have been linked with Manchester United.

"Reports that some of our players are negotiating transfers are misinformed," said former Charlton manager Reed.

"As we stand, there have been no enquiries or offers for any of our players. That is the truth."

Shaw, nominated for the PFA Young Player of the Year award, has produced several exceptional performances for manager Mauricio Pochettino's side this season.

There is not going to be a fire-sale, we want to keep all of our best players at the club and build for the future

He won his first senior cap in March when he replaced Ashley Cole at half-time in the 1-0 friendly win against Denmark.

Lallana is on the shortlist for the PFA Player of the Year award. He has scored 10 goals for the Saints - eighth in the Premier League - this season and won his made his senior England debut in November's friendly against Chile.

"No club has been given permission to talk to any of our players," added Reed.

"We have had a great season and we want to improve on it. We want retain the players we've got. They are all contracted and we intend to honour those contracts.

"Any enquiries we get will probably be met with a 'no, not for sale'. Our intention is to keep this very good team together and build on it by bringing in players to improve on that. We have our targets and these are things we talk about on a daily basis."

Last month the club announced they owed £27m in transfer fees but Reed says that does not affect their ability to keep hold of their star players.

"There is not going to be a fire-sale, we want to keep all of our best players at the club and build for the future."

Reed also moved to quash any speculation surrounding Pochettino's future at the club, with the Argentine yet to commit his long-term future to Southampton.

However, Reed says both manager and club are "comfortable with the situation".

He added: "We would like to focus on the remaining fixtures of the season. We will pick up the contract talks over the summer. We are both happy with that.

"We talk about the future every day. We're both comfortable with the situation. We are planning for the future and the long-term future."