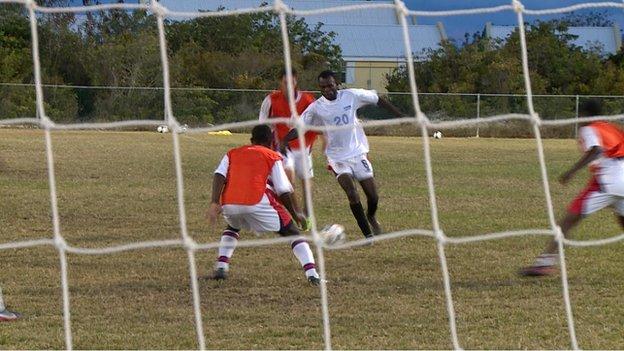 In a little under two months the Fifa World Cup returns to Brazil and the globe will be gripped by football fever, spare a thought for one nation who are languishing at the bottom of the rankings.

One quick glance at Fifa's most recent list and you will find the Turks and Caicos Islands at position 207.

They share the honour of being officially the world's worst international side with Bhutan and San Marino.

It's a fact that Craig Harrington cannot avoid, yet holds no relevance to the change he is trying to bring to the Caribbean island.

"People look at that ranking number and they see where we are in the world, I look at it as a false number" explains Harrington.

Their football development was put into focus with the arrival of the Queen's Baton Relay on the islands.

The preliminary qualification rounds of the Caribbean Cup begin on the 28th May and provide the short term focus for Turks and Caicos, and chance to move up the FIFA rankings.

"We are excited about the Caribbean Cup - I believe we have a good chance," reveals Harrington.

They are joined in their qualification group with Aruba, British Virgin Islands and French Guiana.

The tournament also serves as a qualifier to the Concacaf Gold Cup.

"The players we have in the current pool can take us to the next step.

"Our goal is to get out of our group. I think it is attainable. If we get six points from the three games, that would be a huge success.

"I want to use the performance to inspire our youth players and give them a goal for the future."

Achieving that target would ensure the greatest football achievement in Turks and Caicos history and potentially a move from the dreaded bottom position in the rankings.

A former youth player at Swindon Town and Oxford United, Harrington had coached youth teams in the US for over a decade.

Before joining Turks and Caicos, Harrington was a coach at David Beckham's former club LA Galaxy. He explained his football philosophy is influenced by his time with the MLS side.

"I learnt a lot from watching Bruce Arena's first team coaching and Curt Onalfo, who is the Galaxy Two head coach. He has been a big influence on my career and is a mentor to me. "

His long-term plan for a football revolution on the islands will begin at a grassroots level.

"We are trying to create the culture and the infrastructure, so we can get young players playing and give them an opportunity to get off the island and play in different countries," he explains.

"Currently we have six players playing in America. We have one player who played professional in Gavin Glinton, who played in the MLS.

"We are investing in our coaching at grassroots level for the Under-11s, 15s and 16s. There are some really good players here.

"We want to get more players playing in the American college system, and they will help the national team.

"My personal measuring stick will be under-15 level. From there that will turn into under-20s and hopefully they can make the Olympics."

There might be light at the end of the tunnel for Fifa's bottom ranking team.