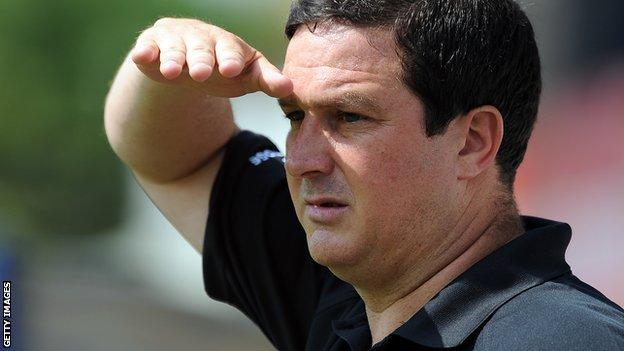 Paul Cox is refusing to let Mansfield's season drift to a conclusion now they are out of the play-off race.

The Stags' 2-0 League Two defeat by Cheltenham on Monday ended their outside hopes of a top-seven finish.

The club host Torquay on Saturday before finishing at Bristol Rovers and manager Cox wants a winning finale.

"It's a long time in the close season to sit and think about your last two games," he told BBC Radio Nottingham. "I want to finish on a high."

Cox's approach stems from his desire to emulate high-flying Scunthorpe, Rochdale and rivals Chesterfield, who are favourites to go up from League Two.

He added: "I'm very analytical and I look at the people who are winning the league and getting promoted and you have to have that inner drive to want to be there.

"I'm envious of those clubs and I want to compete with those boys."

The Stags have 57 points, along with four other clubs, and sit 12th in the League Two table.