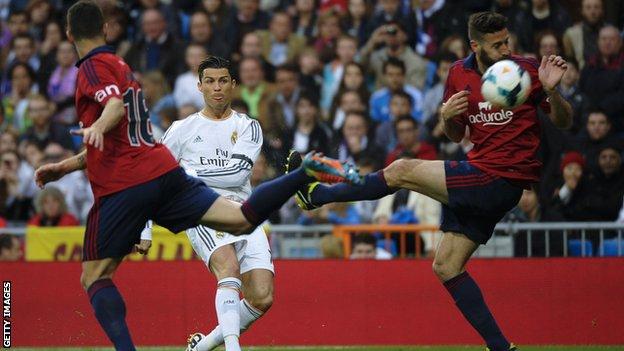 Ronaldo opened the scoring with an unstoppable 25-yard shot before doubling the lead with an equally special finish from the same distance.

Real, who move up to second in the table, have won their last four league games, scoring 17 without conceding.

This was every bit as emphatic as the score suggests, with Carlo Ancelotti's team hitting form at the right time.

Cristiano Ronaldo is the second player to score 30-plus goals in one of the top five European leagues this season, after Liverpool's Luis Suarez

After losing back-to-back league games last month for the first time in five years, Real have bounced back to take 12 points from the last four games.

However they still need Atletico to slip up twice in their final four games - because of their head-to-head record against their city rivals - including the final-day trip to fellow title contenders Barcelona.

Los Blancos head to Germany to face Bayern Munich, who they lead 1-0 from the first leg, on Tuesday still on course for a domestic and European treble.

They are 90 minutes away from a first Champions League final for 12 years and, with four games remaining, are still fighting for their first La Liga title since 2011-12.

Real paraded the Copa del Rey, which they won earlier this month after beating Barcelona, ahead of kick-off before showing their fans that they are determined to add more silverware to the Bernabeu trophy cabinet.

With the trip to Munich very much on Ancelotti's mind, Gareth Bale was rested after his recent bout of flu while striker Karim Benzema was on the bench.

Yet neither were missed as Ronaldo set the tone with two sublime goals that pushed Osasuna closer to relegation.

The 29-year-old showed brilliant vision to open the scoring in the sixth minute with a delightful shot from outside the area that dipped and curled before hitting the net.

Ronaldo teased and tormented the Osasuna defence before making it 2-0 with a similar finish in the 53rd minute, his shot too powerful for the keeper to stop.

Defender Ramos was well placed to direct Angel Di Maria's inviting cross into the visitors area over the line to make it 3-0 on the hour mark.

It could have been more against an Osasuna side that is three points above the relegation zone with three games remaining.

Ramos, before he scored, and Raphael Varane were guilty of missing good chances, while Marcelo and Luka Modric also went close.

Real still require Atletico to drop points if they are to be crowned champions of Spain for the 33rd time.

But they are in formidable form as the season reaches a thrilling climax.