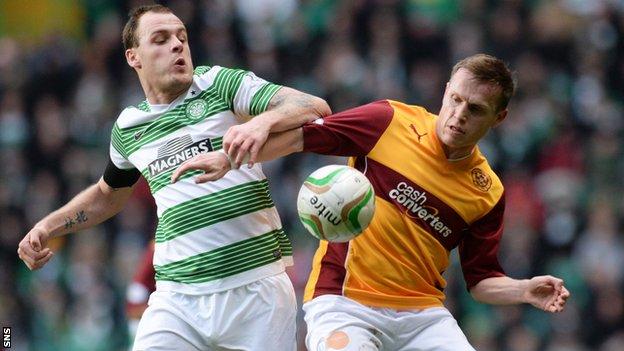 Full-back Stevie Hammell is expected to make his 500th appearance for Motherwell in Saturday's Premiership match away to Dundee United.

He joined the Fir Park side at the age of 18 and made his first team debut against Aberdeen in 2000.

He left for Southend United in 2006 but returned to 'Well two years later.

"It has come around pretty quickly, I can still remember my first game as if it was last season," the 32-year-old told the Motherwell website.

"To play that many games for such a special club means a lot to me. It's a special honour.

"I have had a great time. Every season we continue to do well. It's a great place to work and everyone is close, whether it's the office staff or kitchen staff.

"The six years have flown by and hopefully there will be a lot more.

"Everybody that knows me knows how much the club means to me. A lot of players will go through their career and not find that club that has a place for them, but I was lucky enough to find it here and I've been lucky enough to play so many games for the club.

"It's been a special time for me and my family are all Motherwell fans now and I'm not done yet, not by a long way."

Hammell, who won his solitary Scotland cap in a 2004 friendly defeat by Sweden, listed Motherwell's recent European matches as among his career highlights.

"The European ties come straight to mind, especially when you go away from home and see the fans enjoying themselves and soaking up some top stadiums," he said.

"It's not something you expect from a season but those ties are excellent.

"Also walking out at the Scottish Cup final [against Celtic in 2011] and seeing the mass amount of fans and their big display and the support they gave us.

"Even though it turned out to be one of the low points [losing 3-0], the experience of seeing so many Motherwell fans was excellent."