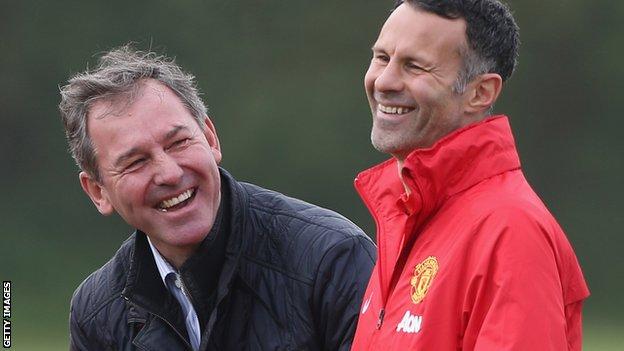 The Welshman has been placed in temporary control for the final four Premier League games of the season after the sacking of David Moyes.

But former Old Trafford and England captain Robson - while not ruling out a permanent appointment for Giggs - expects United to choose an experienced coach in the summer.

Robson, 57, speaks about who was to blame for Moyes's departure and what the club needs to do to regain its place at the pinnacle of English football in an exclusive interview with BBC Sport's Katherine Downes.

Q: Does the blame for David Moyes's lack of success rest squarely with him?

A: He lost 11 league games at Manchester United and the expectation of the fans and the club is better than that. David is a hard-working, conscientious guy. He used to take all training sessions.

Sometimes there is a case of you trying too hard. He tried that hard he didn't relax into the job. That's just my view. Nobody can knock him for working hard and trying to get results.

Q: What do you think of the way the sacking was handled?

A: Over the years United have been pretty good in that not too many things have leaked out. The last thing you want is to make a decision when you have not spoken to the person involved, and then all of a sudden it comes out in the media.

When you have got a lot of people in one room there is always somebody who is going to speak to someone else and that's what appears to have happened.

Q: Do you agree it was an unprofessional way of dealing with it?

A: Definitely. If you are going to sack anybody in football the first person who has got to know is the man who you are sacking.

Q: Do you think Manchester United are a club in crisis?

A: No, because of the squad of players they have. With Ryan being in charge with Paul Scholes and Nicky Butt, and Phil Neville in behind them, it is a matter of concentrating on football and letting everything settle down. They will try to win the last four games of the season. It's as simple as that.

In the summer the club has got to make a decision. I don't think any decisions have been made on that - on who is going to be the next manager or whether Ryan has done a good enough job and they are impressed with him.

Q: Has it been embarrassing for United?

A: It's not embarrassing but a big disappointment after all the success over the last 20 years. The disappointment is on the football pitch. People talk about what goes on off the pitch but who is really interested in that? The main thing is getting results. Criticism off the pitch doesn't come if you are successful on it.

If you are not doing well on the pitch people are going to look at the set-up and say, something is not quite right here.

Q: And is that Moyes's fault?

A: That's why David Moyes got the sack. He's in charge and you have got to get the best out of your players and unfortunately that didn't happen.

Q: Is Ryan Giggs the kind of man the players are going to get behind?

A: Ryan should get a good response from the players. I've said all along that the players have underperformed as individuals and there is better to come from them. They proved that the two seasons before where they won the title and only got beaten on goal difference [by Manchester City].

It's the same squad of players so they should have done better no matter what people say of David Moyes.

Q: Roy Keane says the players should be ashamed of themselves - should they?

A: That's Roy's opinion but as a player you always have to look in the mirror and say "am I getting the best out of myself" and there are definitely quite a few who could have done that and said "this is not the usual me".

Q: How tight is the bond between Giggs and the other members of the Class of '92 now in the dugout?

A: That group of players grew up together from being 12 and 13 within Manchester United. They know how the club is run and what is expected. They will try to get the best out of the team and then it's up to the club to make a decision.

Ryan is going to be a manager. He is management material. He's strong-minded and dedicated to the game and that's why he has had such a fantastic career. He will get the respect straight away from the fans and the players. Hopefully he will get that response and the club will win the last four games.

Q: Will he be Manchester United manager at some point in the future?

A: He could be. It's up to Ryan to go out and prove himself. I have not actually seen Ryan coach and that's a different ball game. Pep Guardiola came through the ranks at Barcelona and then got a chance [as manager] and was very successful.

Ryan is a strong man but whether he is a good coach, or whether he can delegate to bring in good coaches underneath him, only time will tell.

Q: Does the next manager have to be a little bit like Sir Alex Ferguson and play a more positive brand of football?

A: Everyone has been used to it under Sir Matt Busby, Sir Alex and even Ron Atkinson - attacking football that is good to watch. That's the way the club has got to play to pacify the fans.

Ryan has already said he wants the boys to go out and express themselves and play attacking football because that's the way he has been brought up. There has got to be a bit of that from the next manager, whoever it is.

Q: What kind of man will it be who takes over?

A: I don't know what the club's feelings are about Ryan but I think they will probably go with a more experienced type of coach who has been at big clubs and done it at big clubs.

Q: What does that man need to do?

A: The club have come out and said they have probably got £200m or so to spend. The biggest job for the next coach is to spend that wisely.

There is not a crisis at Manchester United, there is just a bit of tweaking to do but you have to make sure you spend that money wisely

They are going to lose top players - Nemanja Vidic is going, Rio Ferdinand might decide to retire, Ryan might decide not to play any more. There are three players you have got to replace without anybody else leaving the club. To replace that type of player costs a lot of money.

That's a big part of the next step for Manchester United.

Look at Liverpool. What has Brendan Rodgers done at Liverpool? He bought Daniel Sturridge, Raheem Sterling came through the ranks and has done a great job, Joe Allen is a nice footballer, but that's about it. What he got was a bit of confidence within the squad.

There were probably three new faces who came in and everybody else responded to that. I think that is exactly how Manchester United are at the moment.

You keep the right players, you bring in three world-class players - if you can find them - and that brings the best out of the other class players like Robin van Persie, Wayne Rooney and all these lads.

There is not a crisis at Manchester United, there is just a bit of tweaking to do but you have to make sure you spend that money wisely.