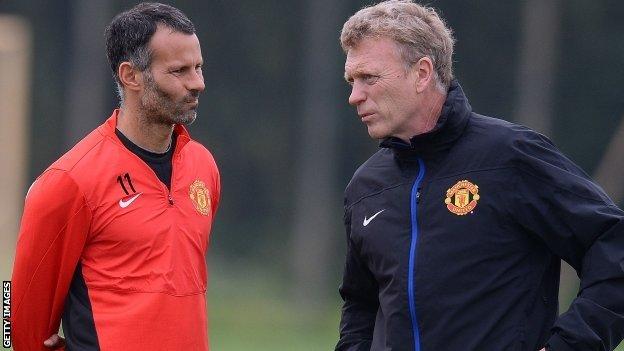 It is one of the major reasons why David Moyes is said to have lost his job and Ryan Giggs says he wants to bring it back over the remaining four games of the season.

"It is my philosophy and it is Manchester United's philosophy," when he spoke to the media on Friday.

But what is this mystical "Manchester United way", which has the power to make or break managers?

Speaking to Bobby Charlton upon the player's arrival at Old Trafford as a raw 15-year-old, United manager Sir Matt Busby encapsulated the essence of an attitude that pervades around Old Trafford to this day.

"All those lads you see going to the factory in Trafford Park, they come to watch you on Saturday," Busby told Charlton. "They have boring jobs, so you have to give them something they will enjoy."

It cannot always be that way, of course.

For the 6-2 win against Arsenal that United achieved on 9 February 1957, there was also a goalless draw against Tottenham a few weeks later.

For the 5-4 thriller at Highbury in the last domestic match before the Munich air tragedy in 1958, there was a 1-0 home defeat to Chelsea in the December of that same season.

There have been long periods of ups and downs, and smaller rises and falls, since Busby uttered his words, but the general point remains.

"We attack," says Sean Bones, vice-chairman of the Manchester United Supporters Trust. "We try to win games with style and flair.

"If you want to pigeon-hole it, it is two wingers, overlapping full-backs and attacking midfielders - but, really, there is far more to it than that. It is almost a state of mind.

"We don't 'aspire' to be like anyone, as Moyes said of Manchester City. We should be setting the example for everyone else in terms of how football should be played."

Going back through the generations, the commitment to wing play can easily be identified.

Pre-Munich, it was David Pegg and Albert Scanlon. Then, in the rebuilt team that went on to win the European Cup in 1968, it was George Best and John Aston.

The tradition continued even in the fallow years of the 1970s, when Steve Coppell, Gordon Hill and Gerry Daly were all revered; just as Gordon Strachan and Jesper Olsen were in the early 1980s.

As Moyes tries to come to terms with the manner of his dismissal, he might reflect on the treatment of Dave Sexton, sacked as United boss in April 1981, despite ending the season with seven successive victories.

That decision was based on the "dull" football his side played, said one sage at the time.

With the addition of powerful, thrusting midfield players, in the mould of Charlton, Duncan Edwards and Bryan Robson, plus the added threat from full-backs such as Roger Byrne, who used to attack in an era where defenders were supposed to defend; and Arthur Albiston, who amassed 485 appearances as an overlapping left-back, the culture became embedded in the club.

"The 'United way' is something fans have got used to," said former United skipper Robson. "It is really attacking, good to watch.

"For the fans, that is the way the club has to play. I would argue United have those players now: Shinji Kagawa, Antonio Valencia, Ashley Young, Nani and Adnan Januzaj are all really good players. The key is getting the best out of them."

Patently, Moyes did not manage it.

What made the situation worse was that he followed a manager who ensured United produced some of the most exciting football the club's fans have ever seen.

Ferguson could call on Lee Sharpe, Andrei Kanchelskis, David Beckham and Cristiano Ronaldo to taunt opponents from the wings.

In midfield, Roy Keane, Paul Ince and Paul Scholes provided the menace, while Denis Irwin, Gary Neville and Patrice Evra did so from deep.

It would be wrong to say Moyes did not try to attack, or that Ferguson was so wedded to the principle of wide men he refused to try anything else.

But when asked to conjure up an immediate image of a Ferguson team, it is of players on the front foot, pinning their opponents back, battering them into submission.

Under Moyes, United were the very inverse of what their fans demanded.

He is taking tentative steps in management but Giggs has already taken a big one - by telling supporters he will give them what they want.

"We have the players to do it, we have players in that dressing room who are winners, used to winning and have a winning mentality. They will show it on Saturday," Giggs said.

"I trust the players, I know what they are capable of and I want them to go out and show it against Norwich."

This from the man who more than anyone epitomises what United have become.

The man who, at Villa Park in 1999, weaved his way through a succession of despairing Arsenal challenges to score the goal voted the best in the history of the FA Cup.