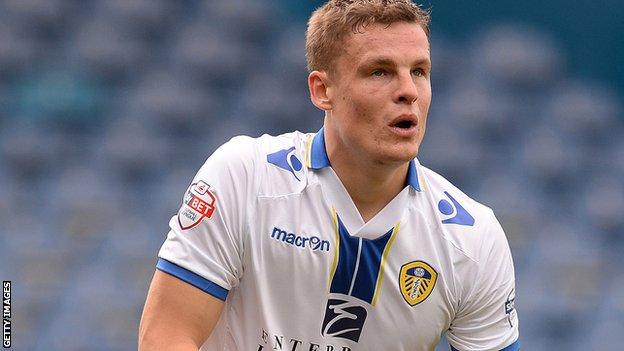 Derby were denied a sixth straight win as Matt Smith earned Leeds a draw in their final game of the season.

Derby, already assured of third place, will play Brighton in the play-offs.

County, whose tally of 84 goals was the highest in the Championship, found chances hard to come by, but by securing a point they set a club record of 85 points in a season.

Derby's Patrick Bamford saw an effort saved by the legs of Butland, who spent the latter part of the season on loan from Stoke City.

Leeds ended a trying season on and off the pitch with three wins and this draw, leaving them in 15th place, nine points above the relegation zone.

Leeds manager Brian McDermott: "Since things have settled down our record equates to 92 points over a season.

"We played some really good stuff against Derby who are the team to beat in the play-offs.

"There are a lot of reasons for where we finished and they are not excuses."

Derby head coach Steve McClaren: "Over the last few weeks we have cemented our place in the play-offs and our level of performance hasn't dropped, but we are taking nothing for granted.

"Brighton will be buzzing after defeating Nottingham Forest and qualifying for the play-offs so we will take that into account.

"When I took the job I would have said you were mad if you had told me we would finish where we are, but the players have been magnificent."

Shots on Target
Home11
Away7