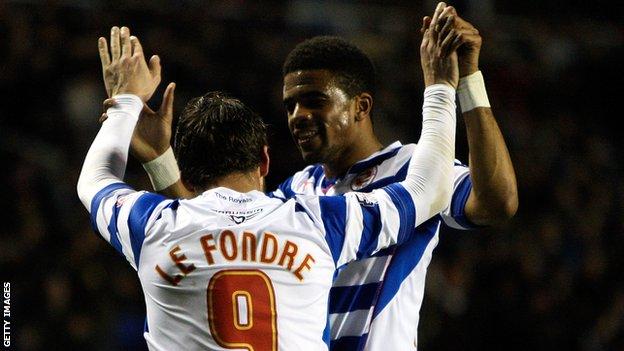 Reading missed out on the play-offs despite Garath McCleary's spectacular equaliser against Burnley.

The hosts went ahead when Kieran Trippier turned Jobi McAnuff's cross past his own keeper.

But promoted Burnley equalised through Scott Arfield's 15-yard finish before Danny Ings fired the visitors into the lead from the edge of the area.

There were tears among Royals fans at the end as news of Brighton's victory at the City Ground filtered through after the final whistle at the Madejski Stadium.

Second-placed Burnley ended the Championship season on 93 points, a higher tally than the previous three champions of the division - Cardiff (87 points), Reading (89) and QPR (88). Newcastle were promoted to the Premier League as champions with 102 points in 2010.

Reading had started the day in sixth spot, one place and one point above the Seagulls in the Championship table.

But Nigel Adkins's side, relegated from the Premier League last season, will have to start planning for another season in the second tier after an agonising end of the campaign.

The Royals had started against promoted Burnley with all the determination of a team with everything to play for.

They were denied a first-minute penalty by referee Mick Russell after Clarets skipper Jason Shackell appeared to handle a powerful shot by Russian striker Pavel Pogrebnyak.

But when Trippier turned McAnuff's low cross into his own net, the decibel levels inside the Madejski Stadium increased dramatically.

Their lead lasted only four minutes, Arfield drilling home Burnley's equaliser from 15 yards as Reading paid the price for failing to clear a goal-mouth scramble.

In an entertaining contest, Reading came roaring back.

They were denied a second when Shackell blocked Hope Akpan's powerful shot.

And Clarets keeper Tom Heaton produced a great close-range save to keep out McAnuff's deflected shot before Burnley went ahead for the first time following a delightful move that has been a trademark of their excellent season.

Ings had his back to goal when he collected a disguised pass from Dean Marney on the edge of the Reading box.

But the Clarets number 10 showed his class by finding the corner of the net with a low finish, his 21st league goal of the campaign.

He almost made it 22 right at the end of the first half, only to be denied by Alex McCarthy when one on one with the Reading keeper.

McCleary's equaliser was a joy, the midfielder finding the top corner of the net with an unstoppable volley that meant his side were heading for the play-offs.

Pogrebnyak and McCleary then both spurned chances to win the game for the hosts and put the matter beyond doubt.

But those errors were to prove costly as Brighton's late winner at Forest ended Reading's promotion dream.

For Burnley, an excellent campaign ended with 93 points - more than enough to have finished top in any of the past three seasons - and with a Premier League campaign to look forward to.

Reading boss Nigel Adkins on missing out on the play-offs: "It's important you feel the pain and the hurt because that's what makes you work even harder.

"You need to have a negative experience to make you stronger.

"We can't change anything now, we've given it a good go, and the future is still very bright at this club. We'll take a couple of days to chill out and then reflect on it.

"We were well aware what was happening at Nottingham. There were a lot of oohs and aahs going on. We were going for everything. We couldn't have done much more."

Burnley boss Sean Dyche: "That was just about a fair result.

"Reading obviously had to go for it but we defended very well. After the own goal, I thought that we were good value.

"I was very happy with the team and individual performances. There were so many good things today, good habits and good displays. I'm proud of all the players and all the staff.

"We had to focus on just ourselves. That's the marvel of the last day of the season, with all its twists and turns. But Reading will come back. They're a good club."