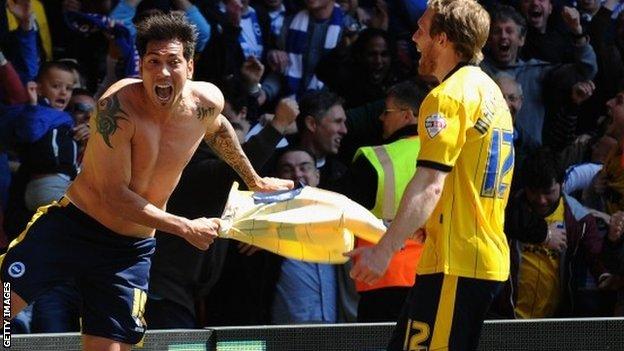 Brighton came from behind against Nottingham Forest to secure a play-off place thanks to a stoppage-time winner by Leonardo Ulloa.

A clumsy mistake by Brighton goalkeeper Tomasz Kuszczak allowed Matt Derbyshire to put Forest ahead with a tame header.

Stephen Ward levelled with a fine half-volley, while Kazenga Lua Lua and Will Buckley went close in the final stages.

The 90th minute header sparked wild celebrations from the visiting fans and players as Brighton sneaked into the play-offs at Reading's expense by a point, setting up a two-legged semi-final tie against Derby.

Brighton needed to better Reading's result against Burnley, but even with the Royals merely drawing 2-2 at home it seemed as if the Seagulls were going to agonisingly miss out on sixth spot.

Substitute Lua Lua unleashed a thunderous 25-yard effort which flew fractionally wide while, in the final five minutes, Buckley attempted to dance around Dorus De Vries, only for the Forest goalkeeper to snatch the ball from his feet. 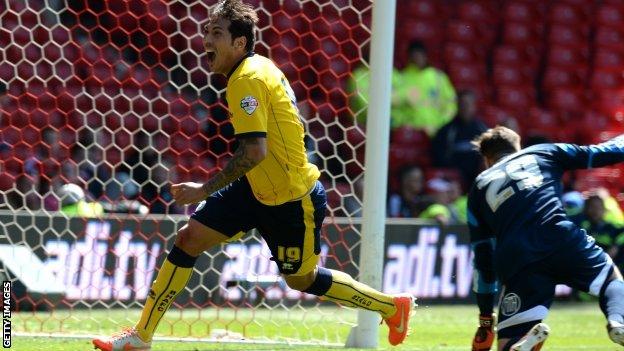 Time was running out, but the visitors counter-attacked in what proved to be a glorious final fling, with Mackail-Smith's perfectly placed cross finding Ulloa.

Up until that point, Ulloa had been far from ruthless in front of goal, missing a glorious opportunity to give his side the lead in the opening 10 minutes as he dragged his effort wide of the far post when through on goal.

Forest's hopes of finishing in the top six ended last weekend, but they have a fine record against a Brighton team which had last beaten them in December 2011 - and it seemed as if their hex over the Seagulls would continue when Kuszczak made his awful error.

David Vaughan found Derbyshire lurking inside the box, but there seemed to be no danger for the Pole until he fumbled and allowed the Forest striker's weak effort to bounce over the line.

Brighton had only won once this season by coming from behind and their lack of potency in the final third during the first half suggested that the statistic was unlikely to change.

Ulloa had a goal rightly disallowed for offside, but De Vries was unemployed in the Forest goal until his defenders failed to deal with a corner and on-loan Wolves midfielder Ward struck with an unstoppable half-volley.

Forest continued to threaten, with Kuszczak diving low to his left to prevent Stephen McLaughlin from restoring the lead, while Marcus Tudgay went a fraction wide moments later.

Chances continued to fall for Forest, but Brighton held their nerve and took their opportunity to keep alive their hopes of playing in the Premier League next season.

Nottingham Forest caretaker boss Gary Brazil: "It was another game that we should have gone on and won.

"I could point to Charlton, Millwall and Brighton- all games we should have won, which would be an extra nine points.

"Where would we be with those nine points? We did not hurt Brighton enough. We gave them the opportunity to get back in the game."

Brighton boss Oscar Garcia on playing Derby in the play-offs: "They have beaten us twice this season. But we will be ready this time, we will be prepared and we will look to beat them this time around.

"We knew that our players would never give up; that they would fight until the end and we got the goal we deserved.

"It is a special time to score, in injury time, but I was happy for the players and for the fans, because they deserved this."