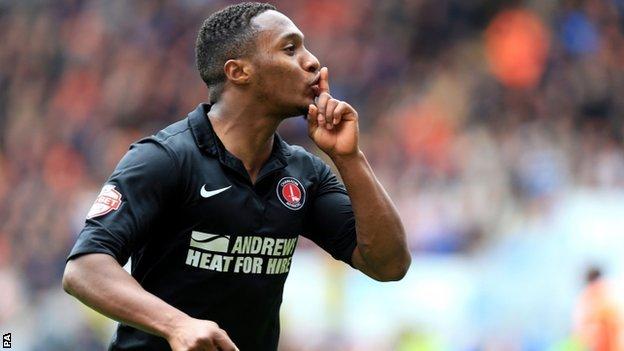 Harriott, who also scored twice in the 3-1 victory over Watford on Tuesday, slotted home to put the Addicks ahead.

The 20-year-old added his second of the afternoon after being teed up by Jon Obika, before adding a late third.

Blackpool, who started the day in 19th place, finished the season two points above the relegation zone as Doncaster lost and Birmingham drew.

It was a close shave for the Seasiders, who were in the Premier League three years ago.

In a turbulent season, manager Paul Ince was sacked in January, with caretaker-boss Barry Ferguson having won just three of his 20 league games in charge.

But they started the final game knowing a point would be enough to guarantee safety.

And they started brightly, with Stephen Dobbie forcing keeper Ben Hamer to tip his 13th-minute shot behind.

Defender Craig Cathcart then headed Tony McMahon's free-kick over as the hosts created the better chances before the interval.

The former England Under-19 international opened the scoring in the 61st minute with a neat finish before completing his hat-trick with two goals in the final eight minutes.

His second, a left-footed strike after brilliant work from Obika, gave keeper Matt Gilks no chance.

And the Norbury-born winger completed his hat-trick in the last minute, latching onto Joe Pigott's pass and firing low to the left of Gilks.

"It's a strange day because we should be really happy keeping the club in the Championship.

"But I just wanted the boys to go out on a high.

"This isn't the way I wanted to finish it."

"I asked my players to end the season with a good feeling and they were able to do it."

"He has speed, he has pace and it's more a question of trying to manage his emotions.

"Everybody knows that he has talent."