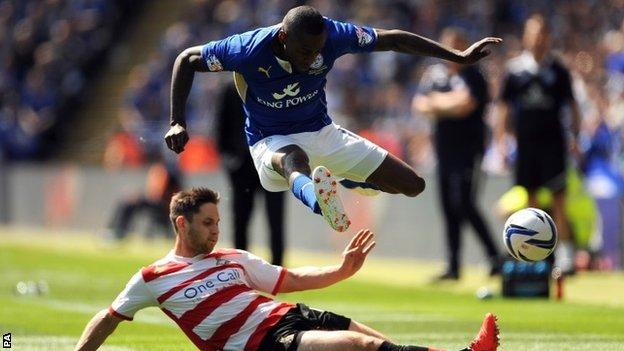 A dramatic late goal for Birmingham at Bolton condemned Doncaster to relegation from the Championship.

Despite being 1-0 down at Leicester, Rovers were set for survival until Paul Caddis made it 2-2 for Blues in stoppage time at the Reebok Stadium.

Although both teams finished level on points, Rovers go down because of an inferior goal difference.

David Nugent scored the only goal for the champions from the spot after James Husband fouled Riyad Mahrez.

That came in the 75th minute, just before Bolton doubled their lead over Birmingham. At that moment, Doncaster were a point clear of Birmingham.

But late efforts from Nikola Zigic and Caddis ensured that it would be the Yorkshire side who would be returning to League One after one season back in the Championship.

The visitors rarely threatened the Leicester goal, with Nigel Pearson's side creating the only clear-cut chances in the match.

Nugent should have done better with the Foxes's first opportunity when Danny Drinkwater found him with a brilliant through-ball. The former Preston and Portsmouth player had only Sam Johnstone to beat, but the Rovers goalkeeper guessed correctly when the striker tried to place his shot.

Nugent was again denied by Johnstone moments later. This time his snap-shot from a corner was pushed away by the keeper, diving low to his left.

Rovers' only shot that tested Kasper Schmeichel came after the break when Gabriel Tamas strode forward before launching a low drive that the Danish keeper easily saved.

Before the goal, the biggest cheer at the King Power Stadium was for striker Kevin Phillips, who retired from football after a 20-year career when he was substituted.

The 40-year-old, who helped five clubs win promotion to the Premier League, will now join the Leicester's coaching staff.

The Foxes deservedly took the lead soon after when Mahrez appeared to be clipped by full-back Husband as he ran into the area. Nugent stepped up for the penalty and smashed his effort high past Johnstone for his 22nd of the season.

With just seconds remaining news filtered through that Birmingham had equalised at Bolton, however Rovers barely had time to react.

As for Leicester, they ended their remarkable season with 102 points - only the 11th team to break the 100-point mark in the second tier of English football.

Leicester manager Nigel Pearson: "For us to go out there and finish in front of our own fans with a positive result and become one of the few sides to go beyond 100 points, is a great achievement.

"People talk about us romping to the title. But it hasn't always been that. We have had to work hard.

"Clearly for us the next step for this club's development is to try and establish ourselves as a Premier League side."