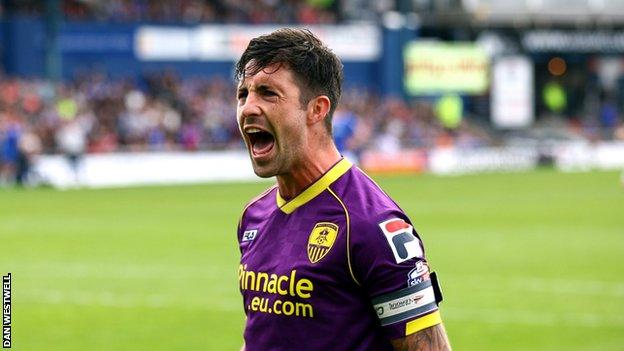 After a drab first half Adam Lockwood headed the Latics in front from a Gary Harkins free-kick.

Notts levelled shortly after when Sheehan blasted home from the spot after Jonathan Grounds was penalised for handball in the box.

Lockwood was then sent off for a second bookable offence as the Magpies secured their spot in the third tier.

Oldham finish the season unbeaten in 10-games while Notts have avoided defeat in their final three matches.

After a lacklustre first period the game came to life when Lockwood's looping header gave the hosts the lead.

But with Notts on the brink they were awarded a penalty, which skipper Sheehan calmly blasted home.

After being booked following the award of the spot-kick, Latics defender Lockwood was sent-off for a second bookable offence shortly after, allowing the visitors to see out the game and retain their League One status for a fifth consecutive season.

"Today was a decent performance until, in my opinion, the referee gets involved and likes to enjoy the occasion more than the match.

"I'd rather Shaun Derry [ Notts County manager] feel that tight than me - we were reasonably fluent at times in our football and there is no doubt it's due to the fact that we were not under pressure to go and win.

"It was a good atmosphere, and a good game really."

"Everybody since I came into the building [as manager in November] has been absolutely righty behind us - Greg [assistant Greg Abbott] and I can't thank everyone enough.

"I don't want to take anything away from what we have achieved - it has been fantastic - but I don't want this situation again. It's horrible. I want us to work hard and it won't happen again.

"This will be a great place to be next year - it is not always going to go sweetly, of course it won't, but it will be a much better place to play football than it was this year."