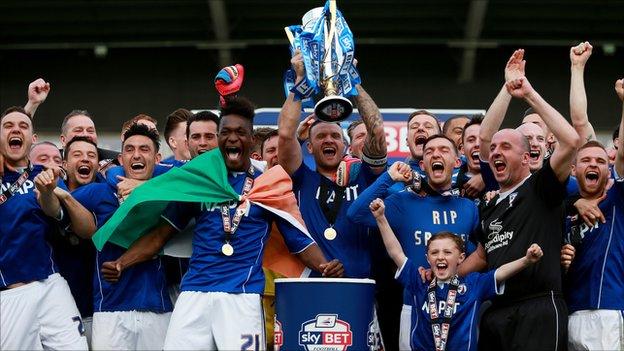 Chesterfield staged a second-half fight-back to clinch the League Two title with victory over Fleetwood.

Matty Blair fired the visitors ahead with a low shot but the hosts turned it around with two quick-fire goals.

First Sam Hird headed Jay O'Shea's cross in from eight yards out and then Gary Roberts curled a left-foot shot past keeper Chris Maxwell soon after.

Chesterfield could have scored more goals before the final whistle sparked off wild celebrations.

"The whole day was set up for us to do something good. At half time you are obviously not happy, but in the second half we did really well.

"Football is all about the players, and it always will be. I can stand here today and take all the plaudits like I'm a top manager, a good manager, but I'm very lucky to have good players here.

"I'd thank everyone because football management is tough, and days like today are very, very good.

"I'm proud of the whole club in general."