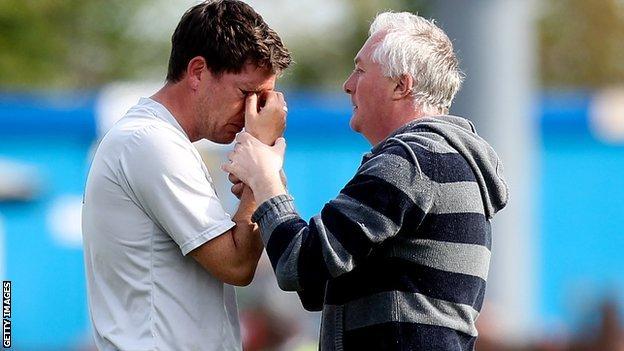 Bristol Rovers' 94-year stay in the Football League came to an end after they lost against Mansfield.

The Pirates needed a draw at home to the Stags but found themselves behind after Colin Daniel volleyed in off the post in the 36th minute.

The home side knew they needed a goal, but saw three efforts hit the crossbar.

And their relegation to the Conference Premier on goal difference was confirmed after Northampton and Wycombe won their final-day games.

The match concluded to chorus of boos and a section of fans entered the pitch to express their anger at Rovers' drop to non-league football.

The Pirates' fate was in their own hands after their 2-1 win last Saturday against fellow strugglers Wycombe, who occupied the final relegation spot at the start of the afternoon.

Rovers started brightly enough, but the 10,000 home fans were stunned into silence in the 36th minute when Daniel placed a low volley past Steve Mildenhall, which bounced in off the woodwork.

Eleventh-placed Mansfield, who were promoted from non-league last year, defended resolutely throughout to stop Rovers finding that important goal.

And as the tension mounted around the ground with 15 minutes to go, captain Mark McCrystal also lashed a volley just over the crossbar.

With five minutes of added time, Mansfield kept hold of possession as the Pirates ran out of ideas.

Initially there was silence around the Memorial Stadium as the whistle blew, before some disgruntled Rovers supporters jeered the players and manager Darrell Clarke off the field.

A section of fans then broke out of the stands - some running towards the away supporters and some aiming their anger towards the boardroom - before mounted police ushered them back.

"It's hard to see a big football club relegated from the league.

"We had to come and be professional and look after our own camp. We finished in 11th so it's been a decent season.

"I'm proud of the football club and I think we deserved the win today."