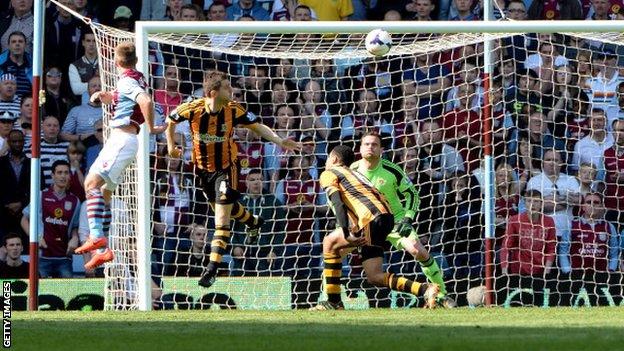 Agbonlahor was forced off with a knee injury before an own goal by Jordan Bowery, his replacement, brought Hull level following Liam Rosenior's cross.

But Weimann restored Villa's lead with a header before nodding his second.

Villa fans have been on edge for most of the season.

But they know they will be watching their team in the Premier League next season if Norwich fail to beat Chelsea at Stamford Bridge on Sunday.

Villa's final home game of an uncomfortable campaign ended in a solid win, a sixth success in front of their own fans effectively removing the threat of dropping to the second tier for the first time since 1988 given they have a vastly superior goal difference to 18th-placed Norwich.

With their last two matches away from home against title-chasing Manchester City and sixth-placed Tottenham, Paul Lambert's side needed to sign off with three points against FA Cup finalists Hull.

And they were ahead almost immediately, Agbonlahor powering down the left before cutting back for Westwood to fire into the corner, the 24-year-old midfielder's third goal of the season.

However, Agbonlahor was hurt in the build-up to the goal and though the 27-year-old forward soldiered on, he was replaced by Bowery in the 24th minute.

The replacement then made a nightmare start as he turned the ball into his own net while trying to keep out Rosenior's low cross.

Hull, however, were unable to build any momentum after the equaliser and have still to win a game since reaching the FA Cup final.

Tigers keeper Steve Harper produced a superb one-handed save to deny Weimann, then did well to tip a Bowery header over the bar.

And Villa took total control with two goals in four minutes from Weimann.

Nathan Baker had twice gone close before the Austria international finally forced the ball over the line with half-time approaching.

It was the 22-year-old's first goal since January but his next arrived four minutes later.

In the best move of the game, Weimann was well placed to glance Bowery's chipped cross beyond Harper to give his side a two-goal interval cushion.

Hull had come back from 2-0 behind at Fulham in their previous game but there were no heroics this time from Steve Bruce's side.

Indeed, it was Villa who went closest to scoring again, the busy Bowery getting behind the visitors' defence to force another save from Harper.

Villa's players returned to the pitch after the final whistle to acknowledge the crowd and mark their last home game of the season.

But it was more a lap of relief than a lap of honour.

For a gallery of photos from Saturday's Premier League action, head to theBBC Sport Facebook page.