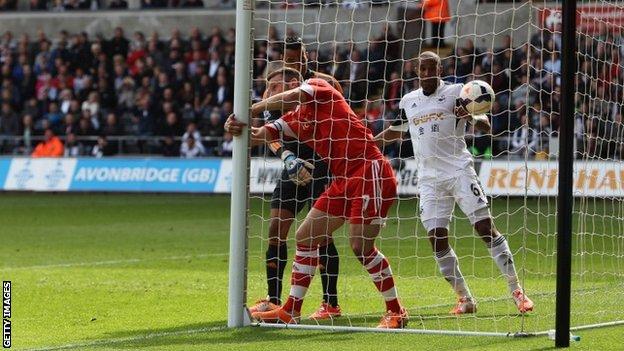 Southampton secured a record seventh Premier League win away from home after Swansea conceded a sloppy late goal in their last home game of the season.

Sam Gallagher headed wide in what was a great opportunity for the Saints, while Swansea's best chance fell for their top scorer Wilfried Bony who shot wide.

Neither team created many chances and the match seemed to be heading towards a draw until Rickie Lambert struck.

Lambert had the last touch for the goal after a mistake by Ashley Williams.

It was a strange conclusion to a tedious match as captain Williams poked the ball over both his goalkeeper Michel Vorm and Rickie Lambert in a clumsy attempt to deal with Luke Shaw's chipped through ball.

Lambert was deemed to have had the final touch before the ball bounced over the line, though it could easily have been awarded as an own goal.

Two successive victories for Swansea prior to this match - against Newcastle and Aston Villa - had already ensured the Welsh team had avoided a relegation scrap before the final two games of the season, and they played like a team content with their lot.

Southampton were even better placed in the table prior to kick-off, having already equalled their best points haul in a 38-game Premier League season, so it was perhaps no surprise that the game failed to match the atmosphere inside the Liberty Stadium for passion and verve. 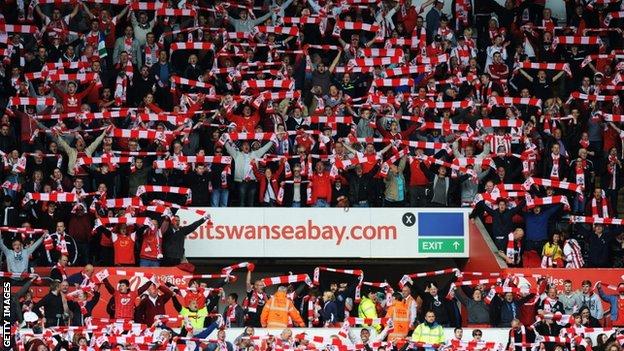 Southampton dominated the early exchanges but the first chance fell to Swansea, with Pablo Hernandez, after good work from Bony and Jonjo Shelvey, seeing his shot parried clear by Artur Boruc.

Jonathan de Guzman fired the rebound into the stands, while Bony later header narrowly wide from a Shelvey cross.

Mauricio Pochettino's side continued to press, although they created little until the industrious Nathaniel Clyne found teenager Gallagher, who failed to keep his header on target.

The striker's miss jolted Swansea into action and seconds later Bony burst into the Southampton box only to direct his shot high when he just had Boruc to beat.

After the break, the match petered out with both sides restricted to long-range efforts which failed to trouble either goalkeeper.

Michel Vorm seemed to be heading for a rare clean sheet until Williams hooked the ball towards his own goal and the alert Lambert beat the Swansea captain and Vorm to the ball to give the Saints a deserved win.

Southampton manager Mauricio Pochettino: "We were lucky because we left it quite late. I just want to congratulate the players because they did fantastic.

"It's been an amazing season. We still have three more points to go for to even surpass the record we've achieved so far.

"It's been a long, hard season but I just want to congratulate the players, all the medical staff and also the fans because they've been amazing throughout the season."

Swansea boss Garry Monk: "We found it difficult to start off with against a very good side. We had three or four really good chances that we should have scored.

"It's just a disappointment at the end. It's a poor goal and we've done that too many times and it's cost us.

"I think the chairman stated [my future] would be decided before the end the season so I imagine at some point before the end of the week an announcement would be made."