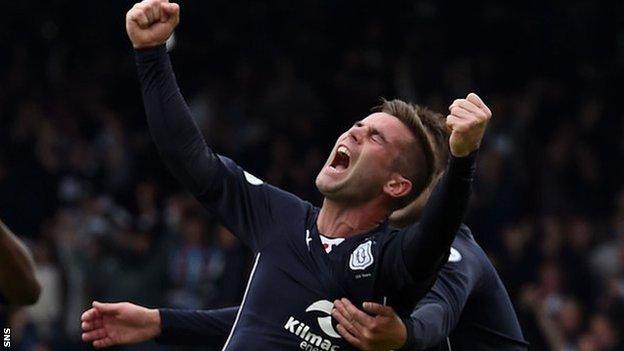 Dundee secured the Championship title and promotion to the top flight with a dramatic victory over Dumbarton.

With Hamilton hammering Morton 10-2, a late Sons equaliser would have sent Accies to the top instead.

Headers from Christian Nade and Peter MacDonald had signalled a championship party in the stands before the break.

But Scott Agnew's 69th-minute penalty gave the Sons a lifeline and Dundee needed a late Kyle Letheren save to win the title for Paul Hartley's side.

Nade had opened the scoring after 25 minutes when he headed in a free-kick from Kevin McBride.

MacDonald doubled the advantage with another header, this time from a cross by Gary Irvine.

Agnew ensured that nervy finish when he tucked away a 69th-minute penalty after Bryan Prunty was fouled by Willie Dyer.

However, Dundee held out to claim top spot by two points from Hamilton, who have to be content with a place in the play-offs.