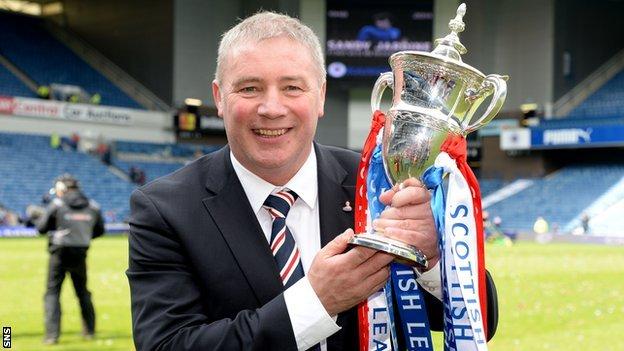 Rangers manager Ally McCoist says the early indications are that his playing budget for next season will be similar to this year's.

McCoist is to meet club chief executive Graham Wallace on Monday to discuss the budget and potential signings.

The business review published on Friday stated that McCoist would be given funds to strengthen the squad as they seek to win next season's Championship.

But Rangers' finances remain in a precarious state.

There are question marks over how much will be earned in the coming weeks from season ticket renewals.

The review also stated that a failure to sell a sufficient amount of season tickets would mean Rangers could not operate without seeking external finance, so it remains to be seen where the money to strengthen the squad will come from.

Five of McCoist's current squad are out of contract this summer, so there could be some slack in the wage bill.

Asked whether he was encouraged by what he had seen in the review, McCoist replied: "I wouldn't go that far."

He added that he would reserve judgement until he had had further discussions with Wallace.

Nor did he wish to discuss the proposed appointment of a chief football operations officer, saying only that he did not know what the post would involve and that only Wallace would be able to answer questions on that.

On a day when fans marked the death of former player Sandy Jardine with a minute's silence, the manager addressed the Ibrox support from the pitch, describing their backing as "unbelievable".

He said: "There has been a lot said and written about the support but [when] you speak to people around the world they genuinely cannot believe the support we have and the love we have for our football club.

"Today is a strange day. You all deserve to celebrate, players and fans alike, but there is no doubt it is also one of the saddest days in our club's 140-year history.

"And, with your blessing, the players and the staff would like to dedicate this year's championship to the one and only Sandy Jardine."