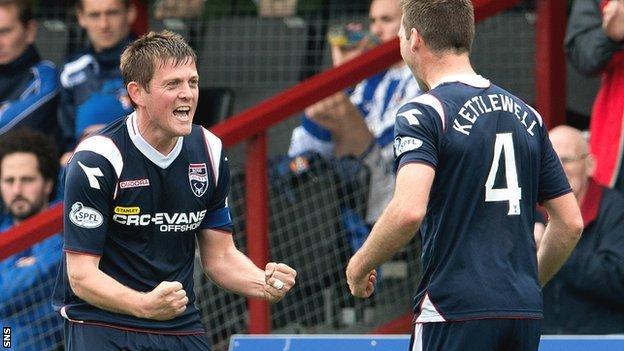 Derek Adams praised his Ross County team after their lifted them out of the Premiership relegation play-off zone.

The Staggies are now in ninth place, a point clear of Killie, who occupy the play-off spot.

"We have shown over the season that we can play in big games and give big performances," Adams told BBC Scotland.

"Today was a big game and it was a big performance from my players. I thought we were superior to our opponents."

With Hearts already relegated, St Mirren, Hibs, County, Partick Thistle and Killie are in a struggle to avoid being the team to play a two-legged tie against the club to emerge from the Championship play-offs.

Yet with only two points separating the five clubs, and the split ensuring the teams play against one another and not those in the top six, each team has their fate in their own hands.

"We want to win our next three games," added Adams after goals by Filip Kiss and Richard Brittain helped his team to a precious home win.

"We're away to St Mirren, home to Hibernian and away to Partick Thistle.

"It was an outstanding performance today, very good from start to finish. I thought we played well and Kiss's goal was excellent.

"We were unfortunate not to have scored a few more today.

"I thought we were strong, passed the ball well, counter-attacked well and controlled large parts of the game.

"I didn't see Kilmarnock going to score, unless [Kris] Boyd got a wee opportunity."

Indeed, that is what transpired as the Kilmarnock striker grabbed a goal two minutes from the end to set up a tense finish.