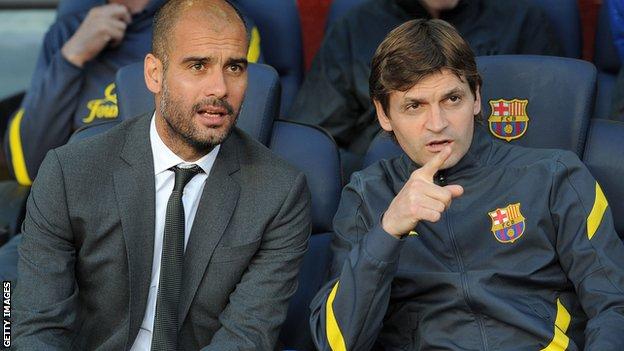 Bayern Munich boss Pep Guardiola says the death of close friend Tito Vilanova will affect him for the rest of his life.

He was Guardiola's assistant at Barca, winning 14 trophies together between 2008 and 2012, before taking charge when Guardiola quit the job.

"The sadness I feel will accompany me for the rest of my life," said 43-year-old Guardiola.

"We have experienced a lot together, lost together, won together. It is a difficult situation."

Guardiola and Vilanova first met as teenagers in Barcelona's famed La Masia academy, where they forged a lifelong friendship.

Their playing careers took different directions as Guardiola had success with Barcelona and Spain, while Vilanova spent most of his time in the Spanish second division with Celta Vigo and Mallorca.

But when Guardiola was given his first managerial role with Barcelona's B team in 2007, he chose Vilanova as his assistant.

The pair were promoted to the senior side a year later following Frank Rijkaard's departure and they combined to lead Barca to three Spanish titles and two Champions Leagues in a period of European and domestic domination.

When Guardiola decided he wanted to take a year's sabbatical from football, Vilanova stepped up to become Barca coach. He won the Spanish title, with 100 points, in his only season at the helm before he was forced to step down as he continued to fight against cancer.

Guardiola and his Bayern players wore black armbands during their 5-2 Bundesliga win against Werder Bremen on Saturday, while a minute's silence was also held at the Allianz Arena.

Meanwhile, Barcelona have declared three days of mourning for Vilanova, whose funeral will be held on Monday in the Spanish city's cathedral.

The Catalan club's players and officials, along with thousands of fans, have visited a memorial space at the Nou Camp following his death.

Supporters have also placed memorabilia, flowers and candles in tribute to Vilanova at the stadium.

Barcelona's first team will observe a minute's silence ahead of their La Liga game at Villarreal on Sunday, with the players wearing black armbands.

A minute's silence will also be held ahead of their next home game against Getafe on 3 May.