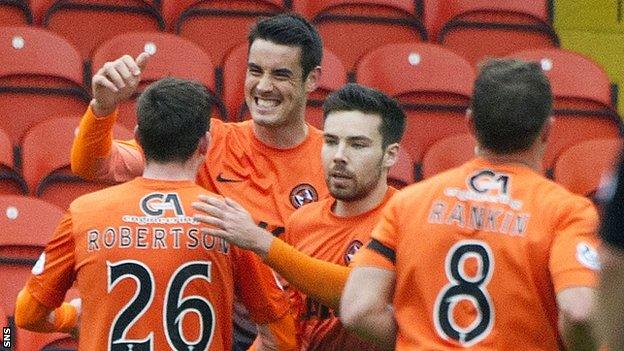 at Tannadice has reignited the Taysiders' attempt to move up the Premiership table, says Simon Donnelly.

United's assistant manager remains hopeful that they can catch the Steelmen, who are four points ahead, and Aberdeen, eight in front.

"Unless it's impossible, we won't give it up," Donnelly told BBC Scotland.

"Motherwell have still got the lead on us. But, if we hadn't got that result today, it would have been impossible."

United's blistering performance against Motherwell will boost their confidence going into their three remaining league games.

After performances like that today, it is always going to be a test for us to try to keep the boys together

They travel to Inverness Caledonian Thistle next Saturday then host Aberdeen in midweek before rounding off their campaign at Celtic Park on Sunday 11 May.

"Right up until last week, with the disappointing result against St Johnstone, we wanted to catch Aberdeen and Motherwell," said Donnelly.

"It's all to play for and we have the Scottish Cup final in four games' time as well.

"It's a great response, particularly on the back of such a disappointing performance last week.

"The boys have responded really well in training this week."

Nadir Ciftci scored twice in the first half to establish a 2-0 lead at the interval.

And second-half strikes from Stuart Armstrong, Ryan Dow and Brian Graham had the home fans in raptures before Lionel Ainsworth's late consolation goal for Motherwell.

"He has been fantastic," said Donnelly of Ciftci. "When he is on his game, there are few better in the league.

"And Stuarty's pace for the third goal is frightening."

Asked if he feared other clubs might try to persuade some of United's best young players to leave Tannadice in the summer, the assistant boss replied: "After performances like that today, it is always going to be a test for us to try to keep the boys together.

"But we want to keep them as long as possible and achieve as much as we can."