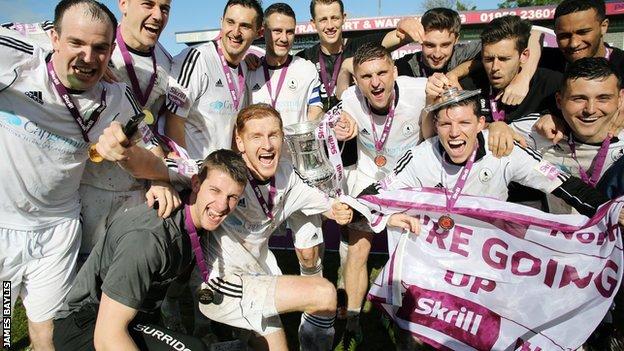 AFC Telford United beat Gainsborough Trinity to win the Conference North title and earn promotion back to the Premier at the first attempt.

Last title triumph for the Bucks

Liam Watson's Bucks won 3-0, with goals from Mike Grogan, a Sean Clancy penalty and a late third from Shaun Whalley.

Fans rushed onto the Bucks Head pitch at the final whistle to celebrate Telford's first title win in 62 years.

North Ferriby United's 1-1 draw at home to Brackley Town meant a point would have been enough for Telford.

It is an immediate return to English non-league football's top flight for the Shropshire club who were relegated a year ago, leaving runners-up Ferriby to settle for a play-off spot.