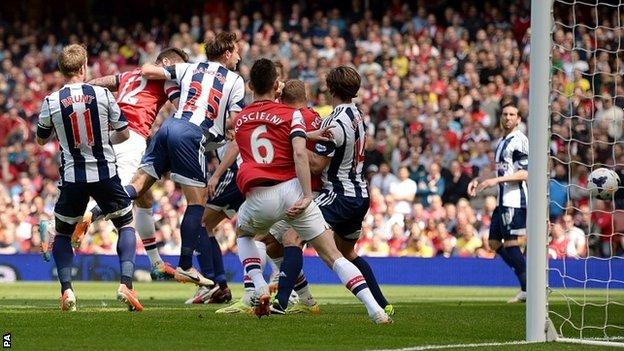 Arsenal celebrated their guaranteed Champions League spot for next season with victory over West Brom as Olivier Giroud's first-half header gave them the three points at Emirates Stadium.

After Everton's defeat by Manchester City on Saturday made the Gunners' top-four spot secure, the France striker grabbed the only goal of the game, rising in front of marker Craig Dawson to convert Santi Cazorla's corner.

West Brom, who rarely threatened, are all but confirmed as safe following Norwich's draw at Chelsea.

Pepe Mel's men are three points clear of the Canaries, who have a vastly inferior goal difference and only have one more game left to play this season.

At Emirates Stadium, the visitors played like a side who seemed certain of safety, barely making Arsenal's defence sweat on a warm day in north London.

Arsenal were slightly more spritely. They were in relaxed mood after Saturday's result ensured manager Arsene Wenger has led his team to a top-four finish in every season since he joined in 1996.

Giroud's early opening goal provided one of the few rousing moments during a sedate match.

The France international has a brilliant knack of losing his marker when the ball is played from the wings, and on this occasion he beat Dawson to score his 22nd of the season.

Baggies keeper Ben Foster was given little chance with that effort and perhaps should not have been given any with a Cazorla shot moments later. But the England World Cup hopeful was on his toes to push away the Spaniard's effort as it headed for the bottom corner.

Arsenal went close once more, after the break, when German Lukas Podolski mis-hit a half-volley from 10 yards that bounced off the post and into the arms of Foster.

The Baggies' best effort of the match came in the first half - a Graham Dorrans 25-yard shot that Wojciech Szczesny patted down.

The Gunners, who deserved their victory, finish their league campaign at Norwich before an FA Cup final against Hull, as they aim to end a run of nine years without a trophy.

For Mel's side, it is a trip to an in-form Sunderland in midweek before they end their season at home to Stoke.