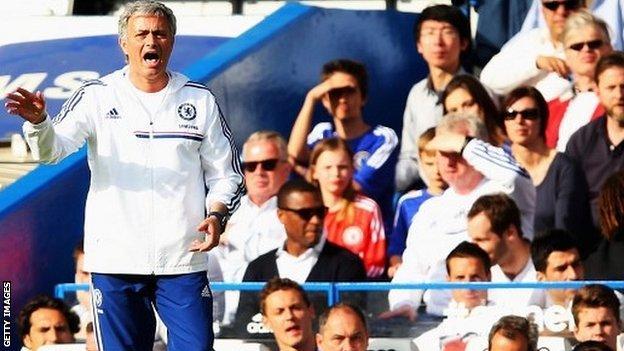 Norwich's hopes of staying in the Premier League remain alive after they dented Chelsea's title ambitions with a hard-fought draw at Stamford Bridge.

John Terry went close with a header and Chelsea twice hit the woodwork, but City's Martin Olsson also had a strong penalty appeal turned down.

The draw means Chelsea's title hopes can be ended by a Liverpool win at Crystal Palace on Monday.

Victory would have moved Chelsea top, but a draw means Jose Mourinho's side are a point behind leaders Manchester City and second-placed Liverpool, having played a game more than both.

The Portuguese has long since made his desire for a new striker known and his case for summer recruits was strengthened by a toothless performance that was only partially improved by the introduction of Eden Hazard's inventiveness in the second half.

Norwich ended a run of eight successive away league defeats and a thumbs-up to the fans from stand-in manager Neil Adams at the final whistle suggests the Canaries still believe, but their chances of survival are very slim.

Even if Norwich beat Arsenal at Carrow Road next Sunday, Sunderland's superior goal difference means the Canaries must hope the Black Cats lose their remaining two matches - against West Brom on Wednesday and Swansea on Sunday - if they are to extend their stay in the top flight.

A Chelsea victory was widely expected, but Norwich - who have only won twice away from home this season - frustrated the hosts and left Mourinho facing the prospect of a trophyless season.

Indeed, the Blues could have fallen behind in the first 10 minutes, with Olsson having a convincing penalty appeal turned down, while Bradley Johnson nearly connected with the Swede's dangerous cross from the right wing.

But it was the hosts who came closest to breaking the deadlock. First the unmarked Terry headed straight at John Ruddy from six yards, then Andre Schurrle beat John Ruddy with a low, curling strike only to see it hit the woodwork.

The introduction of Hazard, whose commitment his manager questioned in midweek, and Luiz at the start of the second half added urgency and incisiveness to Chelsea's play.

And the double substitutions nearly had an immediate impact, only for the woodwork to come to Ruddy's rescue again, Luiz's swirling 25-yard effort striking the crossbar.

Norwich were forced to retreat further and further towards their own goal as the match progressed, but Chelsea were unable to get the better of the away team's compact and obdurate defence, as has been the case for them against many of the league's lower-placed teams this season.

Norwich even had the chance to snatch a dramatic winner through a Robert Snodgrass counter-attack, but the Scot was thwarted by a last-ditch Gary Cahill lunge.

Hazard then forced a fine save from Ruddy but Norwich held firm to consign Chelsea to their worst points total under Jose Mourinho, with their maximum possible haul now 82 - one fewer than the Portuguese's previous worst of 83.