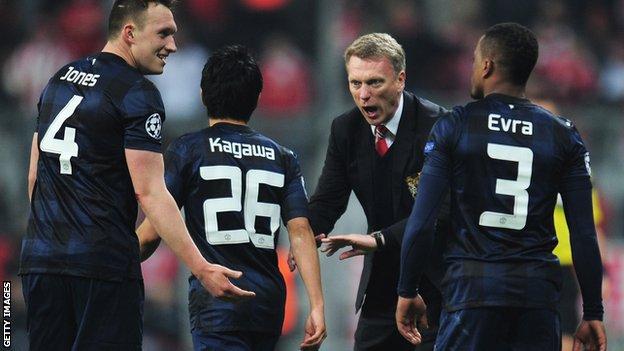 Moyes was sacked on Tuesday after United's hopes of claiming a Champions League place were ended by a defeat at Everton the previous Sunday.

"Players don't go out on the football pitch to lose games," said Jones, after Saturday's 4-0 win over Norwich.

"We are sorry he has lost his job and we didn't get some of the results we would have liked to for him."

The defeat at Everton ensured United are resigned to missing out on Champions League qualification for the first time since 1995.

Unless they can climb from their present seventh place, they will not even claim a place in next season's Europa League.

Moyes was criticised for his work in the transfer market and a perceived negative style of play.

But England defender Jones, 22, said he had sympathy at Moyes losing his job only nine months into a six-year contract.

"He is a nice man, a nice fella and we wish him all the best," he said.

Asked whether the players stopped trying for Moyes, Jones insisted: "Everyone wants to win every game at this club.

"It's not happened for whatever reason but we need to move on quickly and end the season well."

"Myself and David Moyes, we are driven people and we want to work," said McLeish.