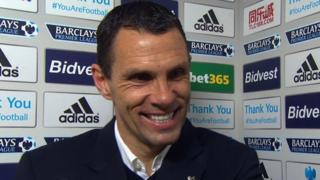 Sunderland boss Gus Poyet says his side's 4-0 thrashing of Cardiff "feels fantastic", as they climb out of the Premier League's bottom three.

Connor Wickham put the hosts in the lead before Juan Cala was sent off for the Bluebirds, and further goals from Fabio Borini, Emanuele Giaccherini and Wickham gave the Black Cats a precious victory.

The Black Cats have taken seven points from their last three matches as they move out of the drop zone on goal difference, and have a game in hand as they aim for survival.