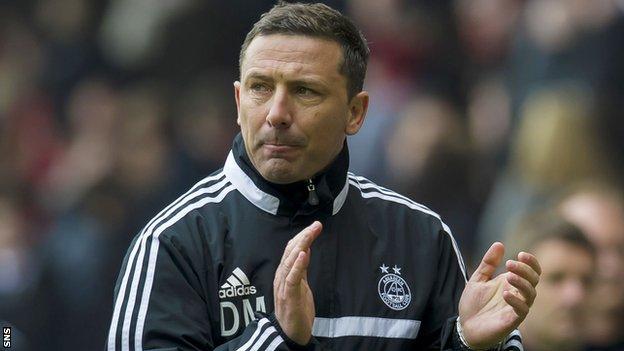 Aberdeen manager Derek McInnes believes the point gained against St Johnstone may yet prove crucial in the Dons' pursuit of Europe.

The Pittodrie side, who came from behind in the 1-1 draw, missed the chance to seal a Europa League qualifying berth for next season.

"Who knows how valuable that point may well be," McInnes told BBC Scotland.

"I don't think we brought enough quality to the game to win but I think there's two sides to that; our own part plus a good performance from St Johnstone.

"They're always tough opponents. Anything you get against them you've got to work hard to get.

"But we'll take the positives from it. It wasn't our best performance and I think it's important to still pick up points when you don't play at your best.

"It's a point that may well prove to be a big point for us going forward."

Adam Rooney levelled for the Dons after Stevie May's opener for Saints, with both goals coming from defensive errors.

Though Aberdeen have occupied second place in recent weeks, they have drawn five of their last six Scottish Premiership matches.

"It's not frustrating, we're just trying to find that extra bit of quality, that extra wee spark to our play," explained McInnes.

"We've lost twice in about four-and-a-half months so it's got to be balanced. We're up there in the second spot, we have been now for a while and we're up there because we've brought quality to an honest bunch of players.

"But the biggest thing that separates teams in second and third spots and the teams at the bottom end is that quality and we need to try and get a wee bit more from individuals from now until the end of the season."

Dons fans showed their support for McInnes to win manager of the season after he was revealed as one of the four nominees along with Celtic's Neil Lennon, Tommy Wright of St Johnstone and Motherwell's Stuart McCall.

"I'm just delighted to be in that company," added McInnes. "Any of them would be worthy winners."