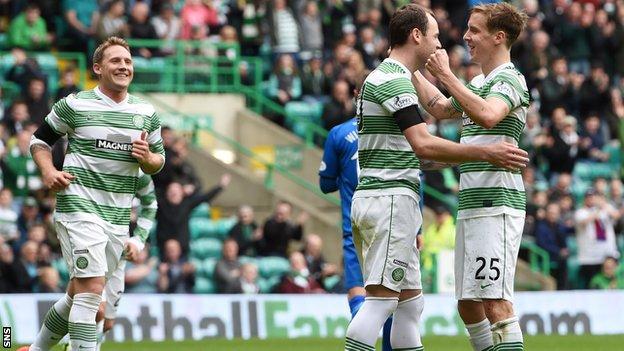 The champions cruised to a home win against the Highlanders with Anthony Stokes hitting a hat-trick.

"It was a fantastic all-round performance and probably the best of the season," said Celtic boss Lennon.

"The attitude of the players from the start was fantastic. Our quality was brilliant and we got stronger as the game went on. All the plaudits go to the players.

"There was a flow to us and we looked really dangerous going forward, defensively we were pretty solid, and when the keeper was called on he made a penalty save."

Lennon revealed news of English Premier League leaders Liverpool's home defeat by Chelsea filtered through to his players at half-time.

And he said that helped him highlight just how well his side have done this season.

"When we got the Liverpool score in we said to them, 'You know titles are not given to you, and you've gone and won yours, and it's never easy to do something like that," explained Lennon.

"You need to enjoy the moment and enjoy your career here and don't take it for granted.

"And they went out in the second half and again the attitude was spot on and they went right to the last minute. We never really gave Inverness an in at all."

"Anthony Stokes is playing really well, he's been bang on form for the last four or five months of the season," added the Celtic boss.

"He's up to 19 goals now and if he gets 20 that'll be his third or fourth successive season getting 20, so he's been a very important player for us.

"I'm just picturing him [Efe Ambrose] landing on his neck one day and us having to scrape him off the floor. You can see the joy he gets out of his football and scoring goals is always special for him."